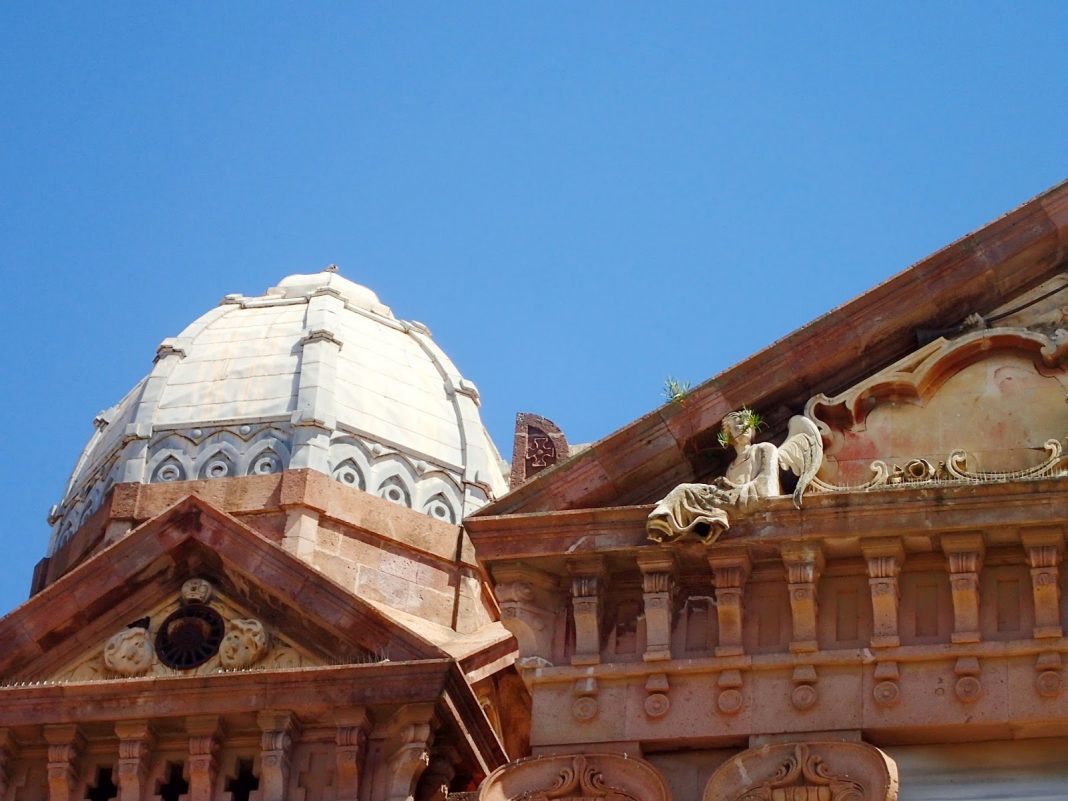 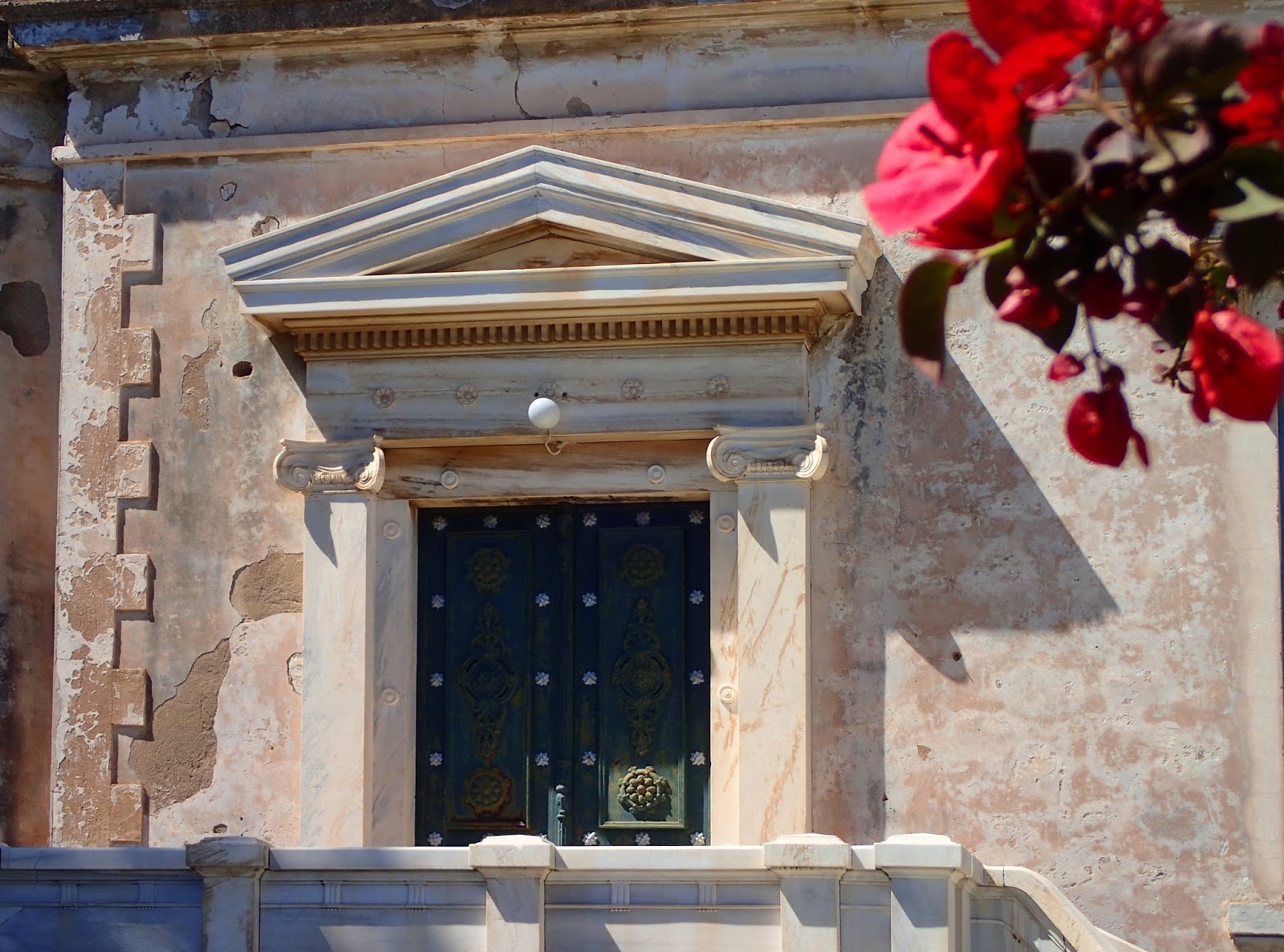 Mansions! Mansions galore. And not one kind of mansion either, but a whole panoply of European styles, of mansard roofs and deep eaves. Olive oil was expensive and Lesvos was rich in it. There was also wine, and leather- goods with a market. Foreign importers drawn to Lesvos for business built in the styles of home, as did wealthy Europeans drawn by the famous spas.

These mansions define a whole neighborhood- you feel like you’re on a stage set, and probably a little under dressed. 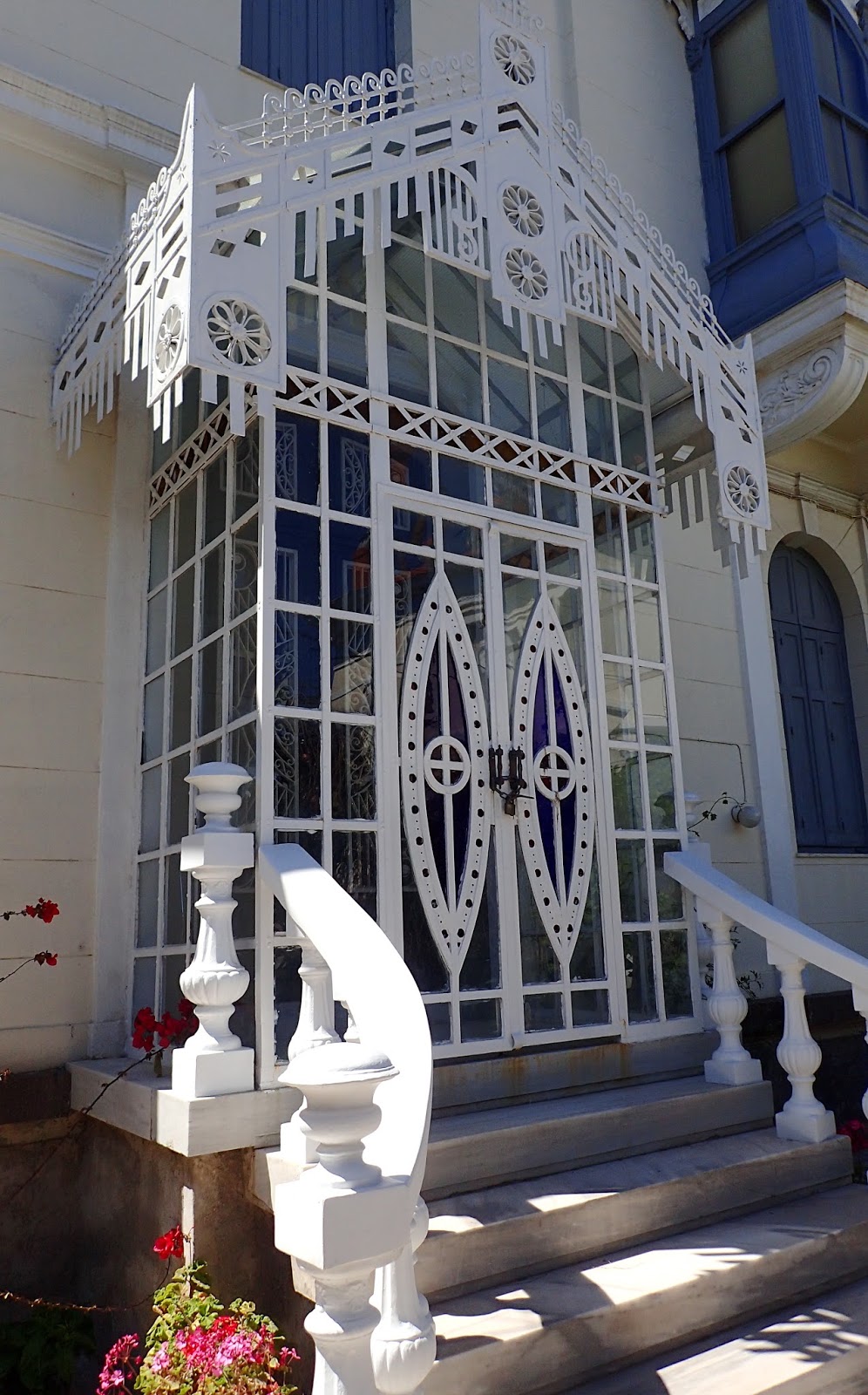 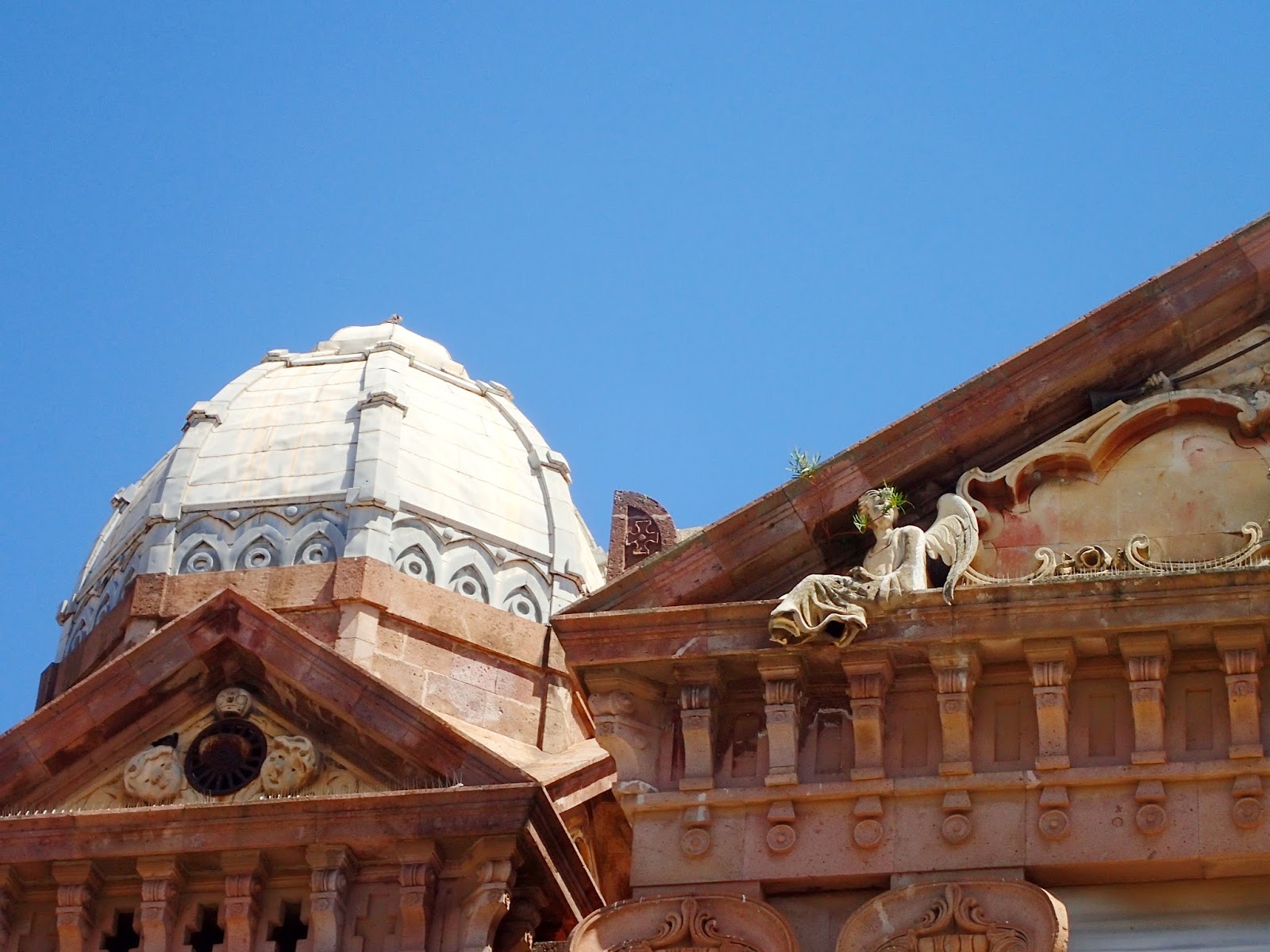 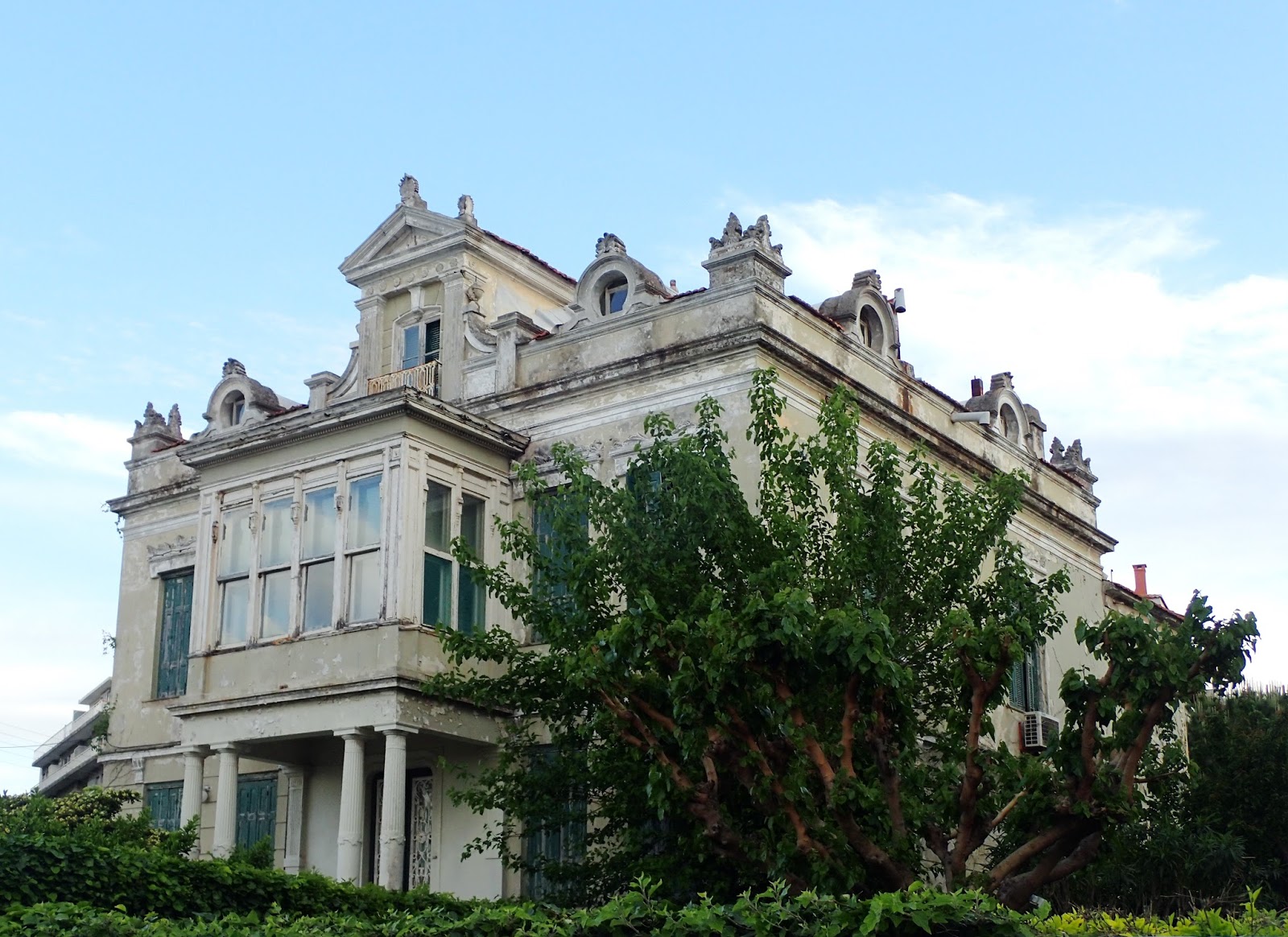 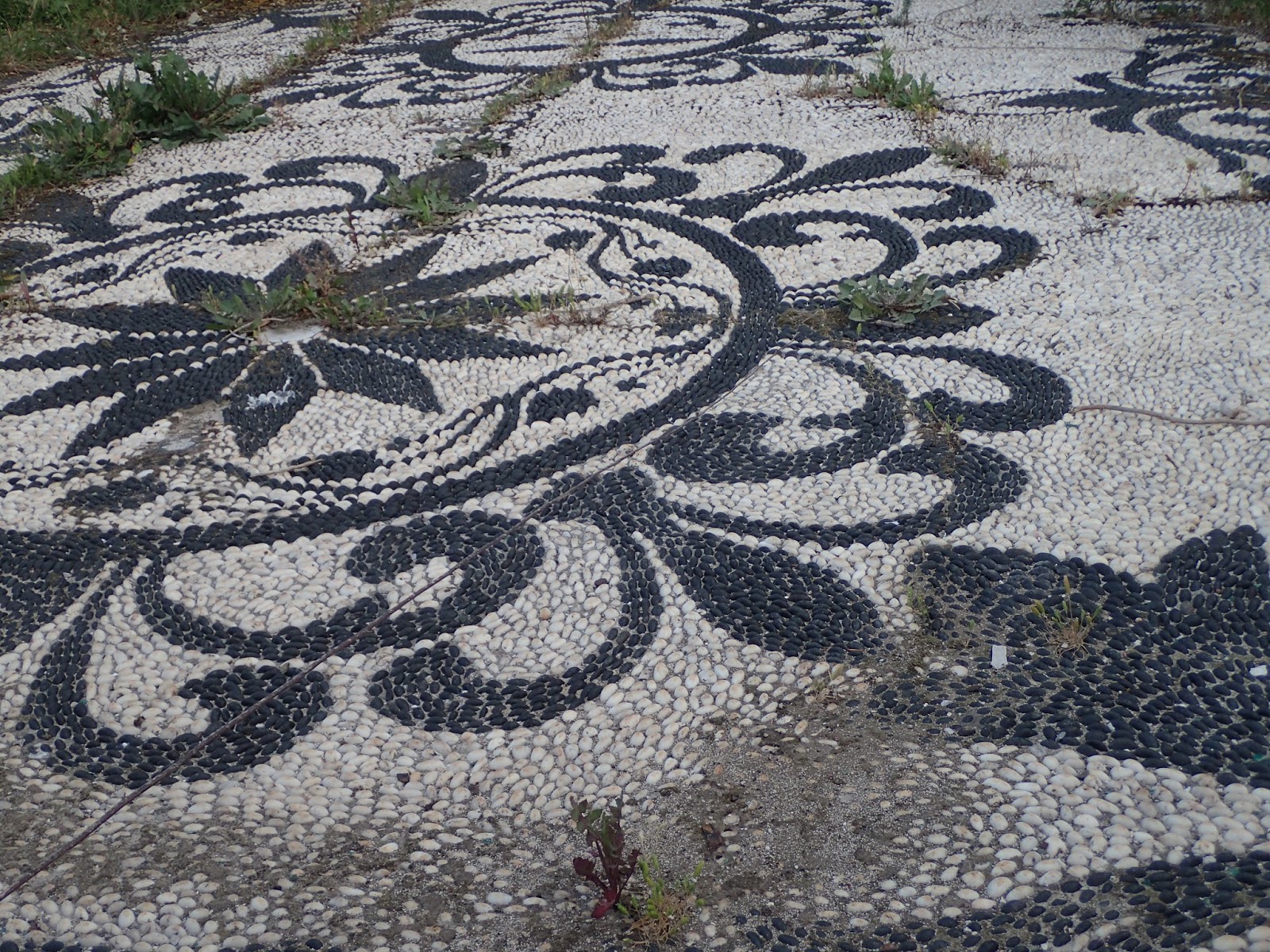 You could live the Belle Epoque elegance first hand and stay at the Pyrgos of Mytilene boutique hotel. We went for a coffee in the lobby- you feel glamorous just being in the salon with the soaring, ultra-ornate ceiling. It’s the real thing- Maria, who invited us to her wonderful island, grew up next door – her mother used to come to dances here.

A house of worship that dominates the city scape – like Notre Dame or the Blue Mosque – sets a grand tone. Mytilene’s skyline is defined by the dome of Agios Therapon cathedral, designed by Argyris Adalis- native to Lesvos, and a student of Ernst Ziller (the neo-Rennaissance Numismatic Museum in Athens, among many others). They both borrowed, and borrowed well. Agio Therapon has a grand baroque mood that- like the mansions- doesn’t speak of Greece specifically but of a cosmopolitan vibe of European capitals in general. 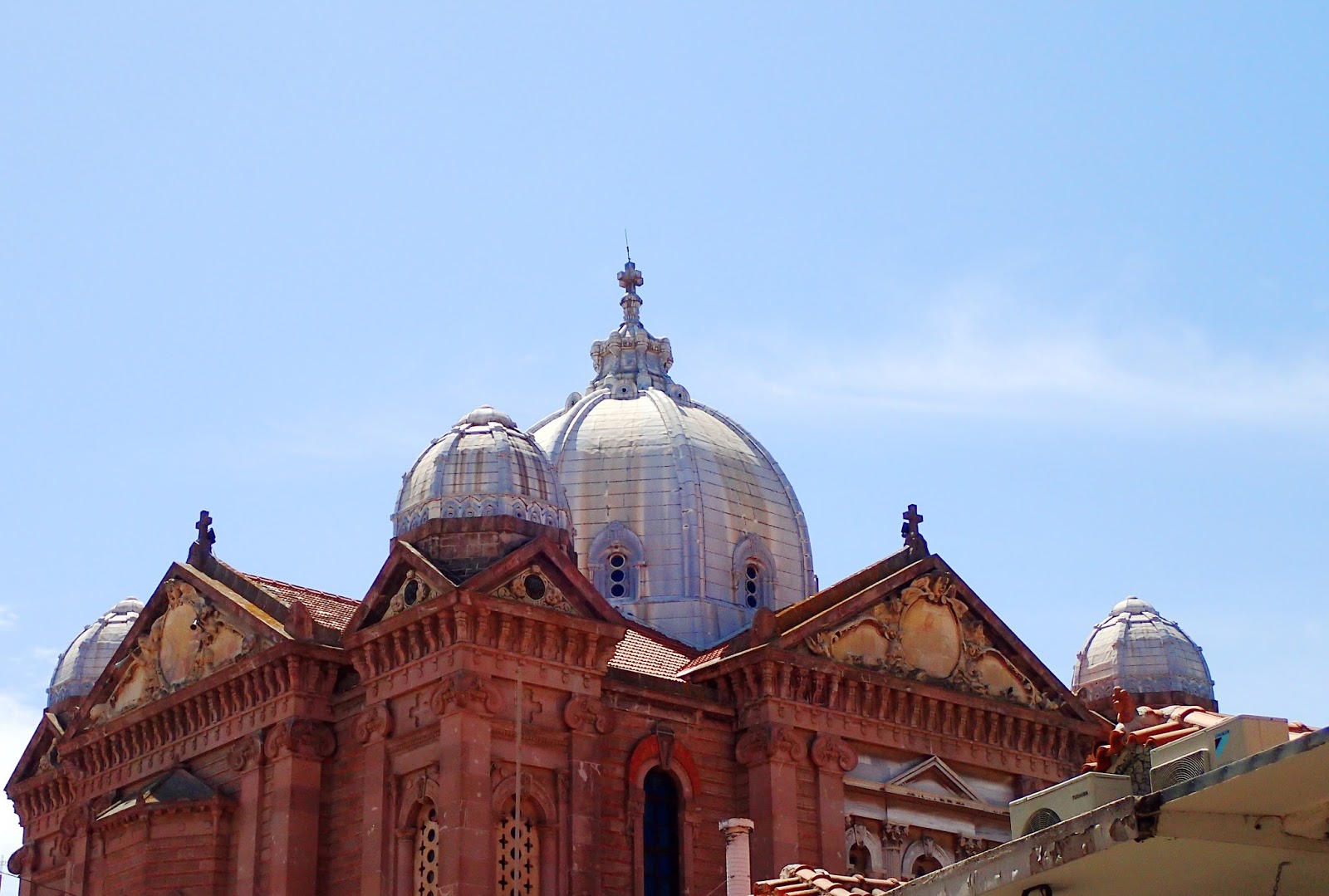 The mansions of the Belle Epoque continue a much earlier tradition. Mytilene was a city of wealth from at least the 2nd C BC. We had a tour with Professor Giannis Kourtzellis of the Museum of Archaeology and couldn’t stop marveling at the mosaic floors of elegant homes, including the dramatist Menander’s. He filled out the corners of our imaginations with symposia and banquets. What also struck us? The reliefs depicting the dinners of the dead, held on the third and ninth days after death (days we commemorate still), and funerary reliefs for heroes- depicted on horseback. Most notable and unusual is the equestrian heroine- women were rarely depicted this way, but then this was found in Eresos (birthplace of Sappho) 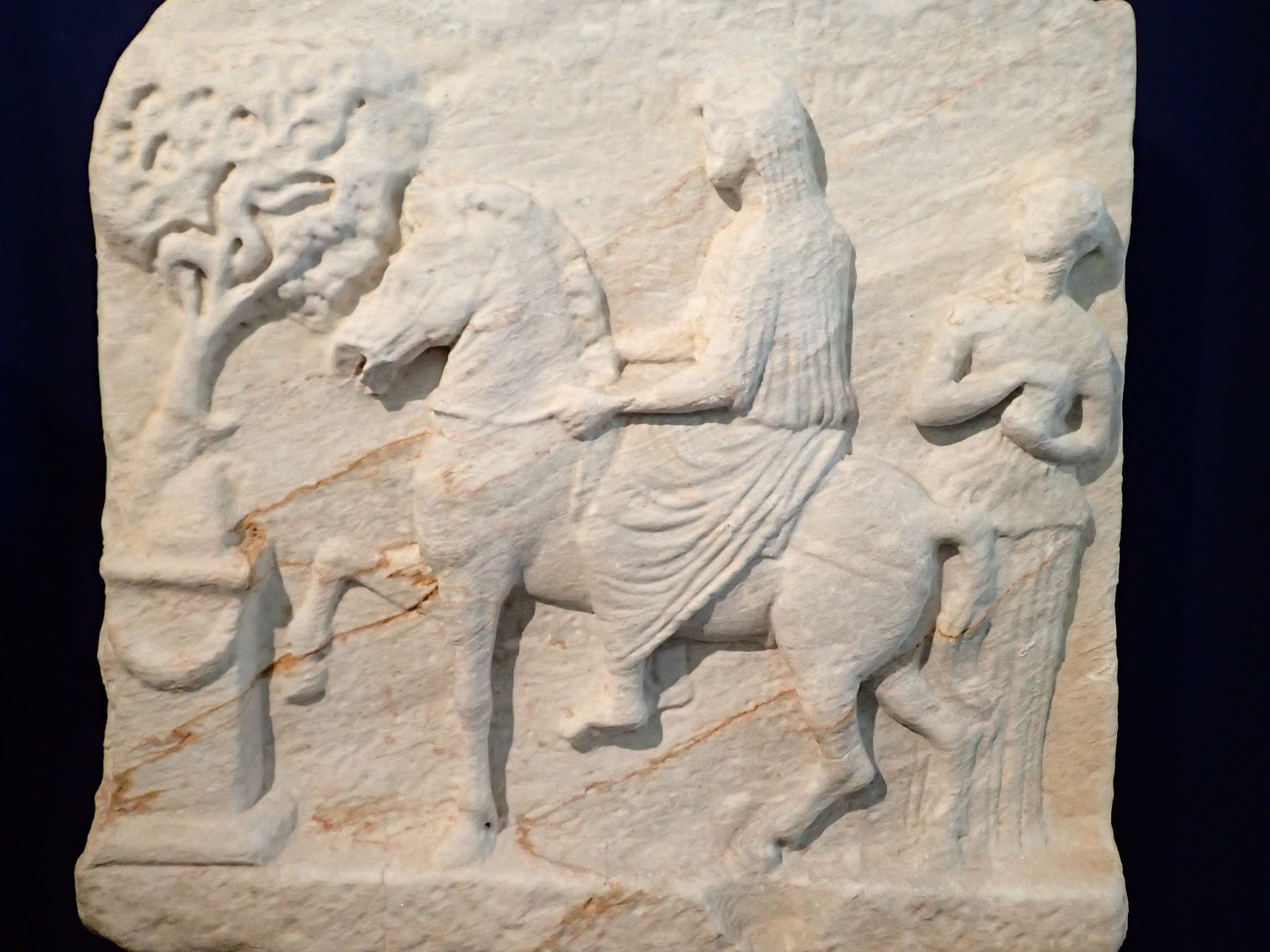 And of course this arresting Praxitelous- 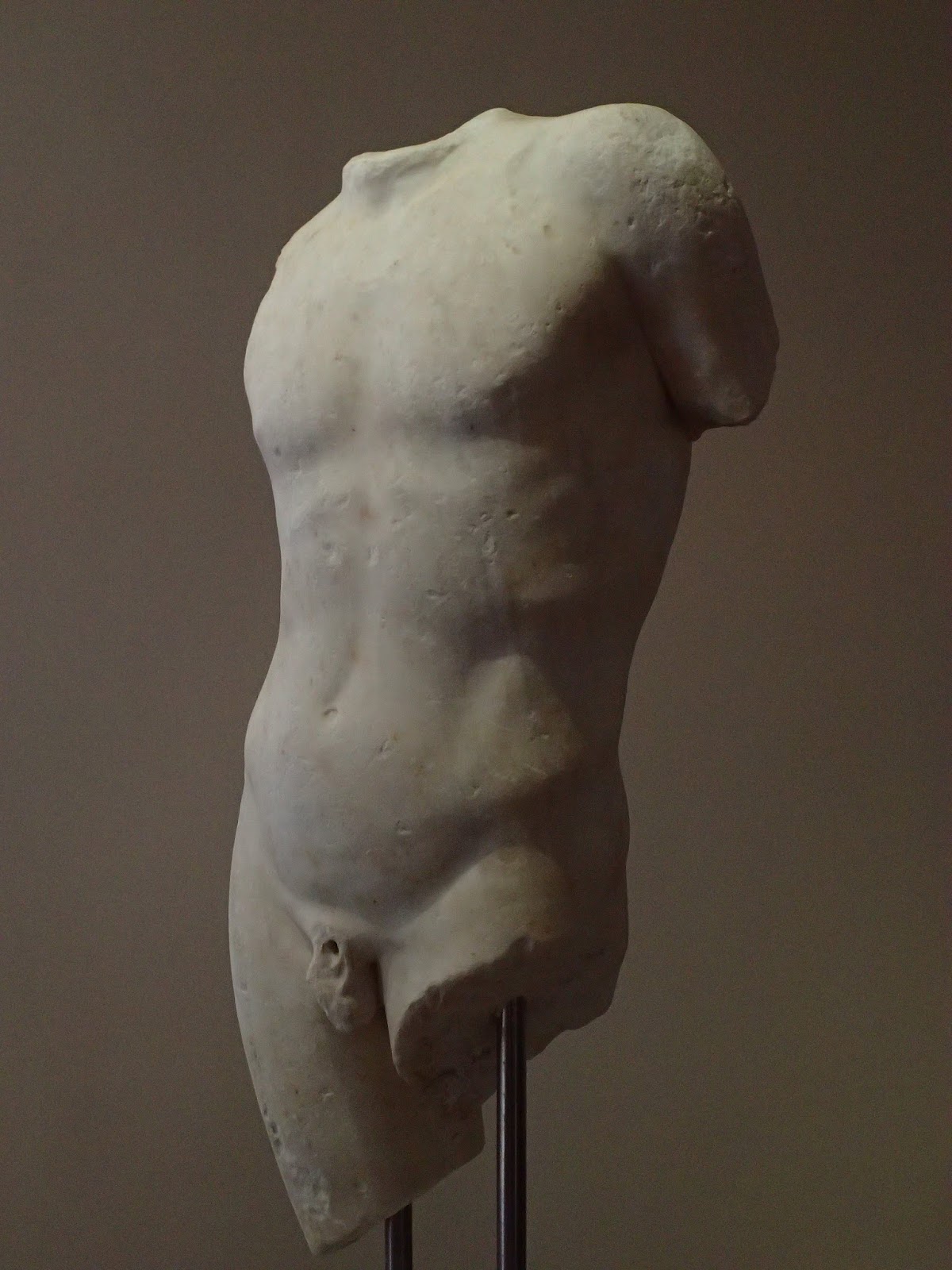 We learn that they’re easily identified – he was known for the naturalistic “S” shaped pose of his figures. There were lots of them- originals in bronze, and copies in marble. 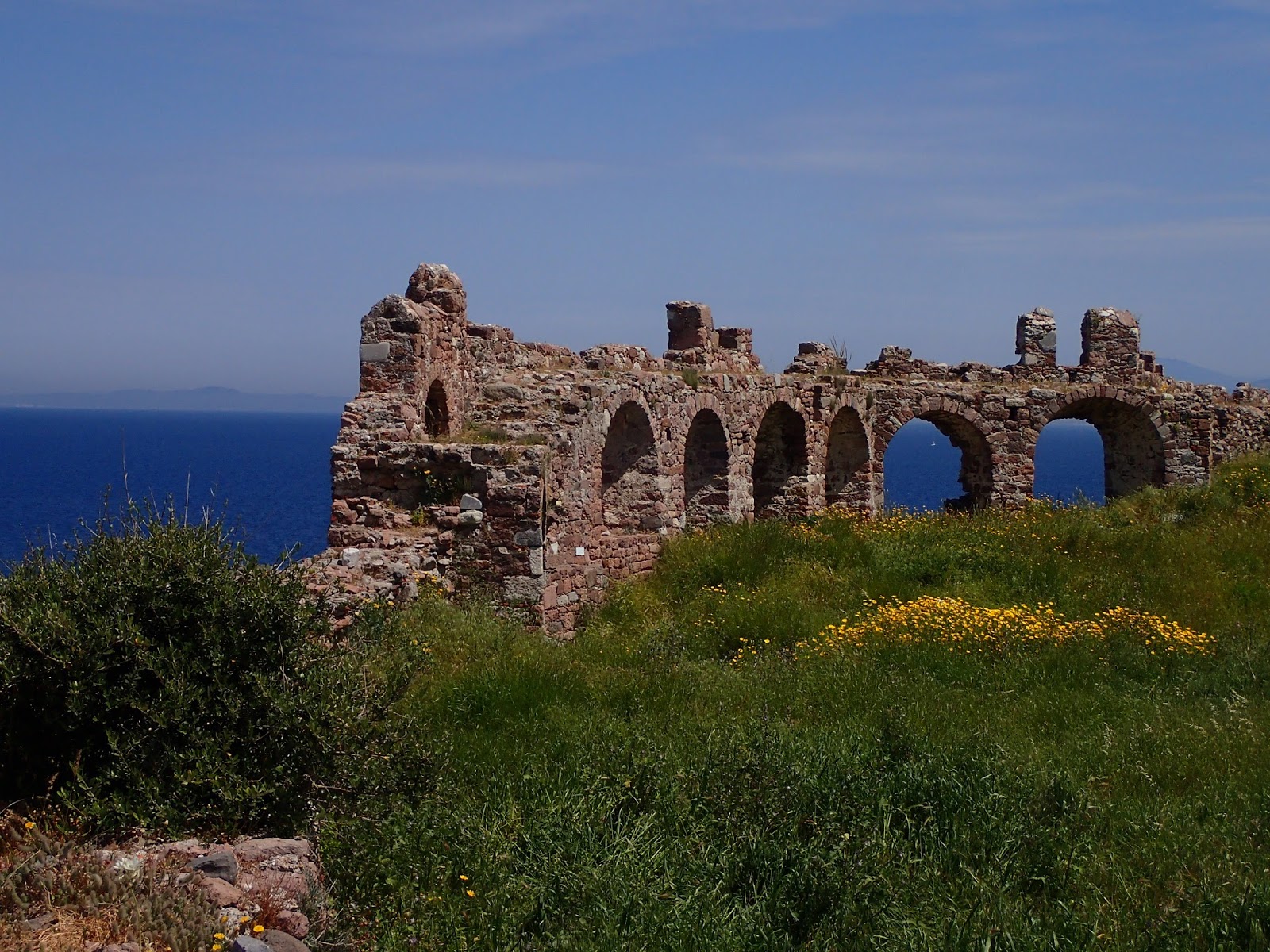 The best view of the city is wasted on this monumental fortress- Gatalusi’s (one-time pirate) home (a wedding present along with the rest of the Island when he wed the sister of Paleologos’ – Byzantine Emperor John V – is one of the largest and best preserved of the whole Mediterranean. On our tour with Archaeologist Georgia Tampakopoulou we only had eyes for the ruins and crests, and ears for her stories. She herself was inspired by the place- she had an intuition that led to the discovery of something that would have been lost forever. Visiting the site with her gave us goosebumps to be so close to the thrill of discovery. It is a tale of its own, coming soon.

A Symbol of Welcome and People of Grace-

I grew up with a meaningful statue in the harbor by my house- it was for many the first sight of America. How perfect that Mytilene has its own Statue of Liberty- 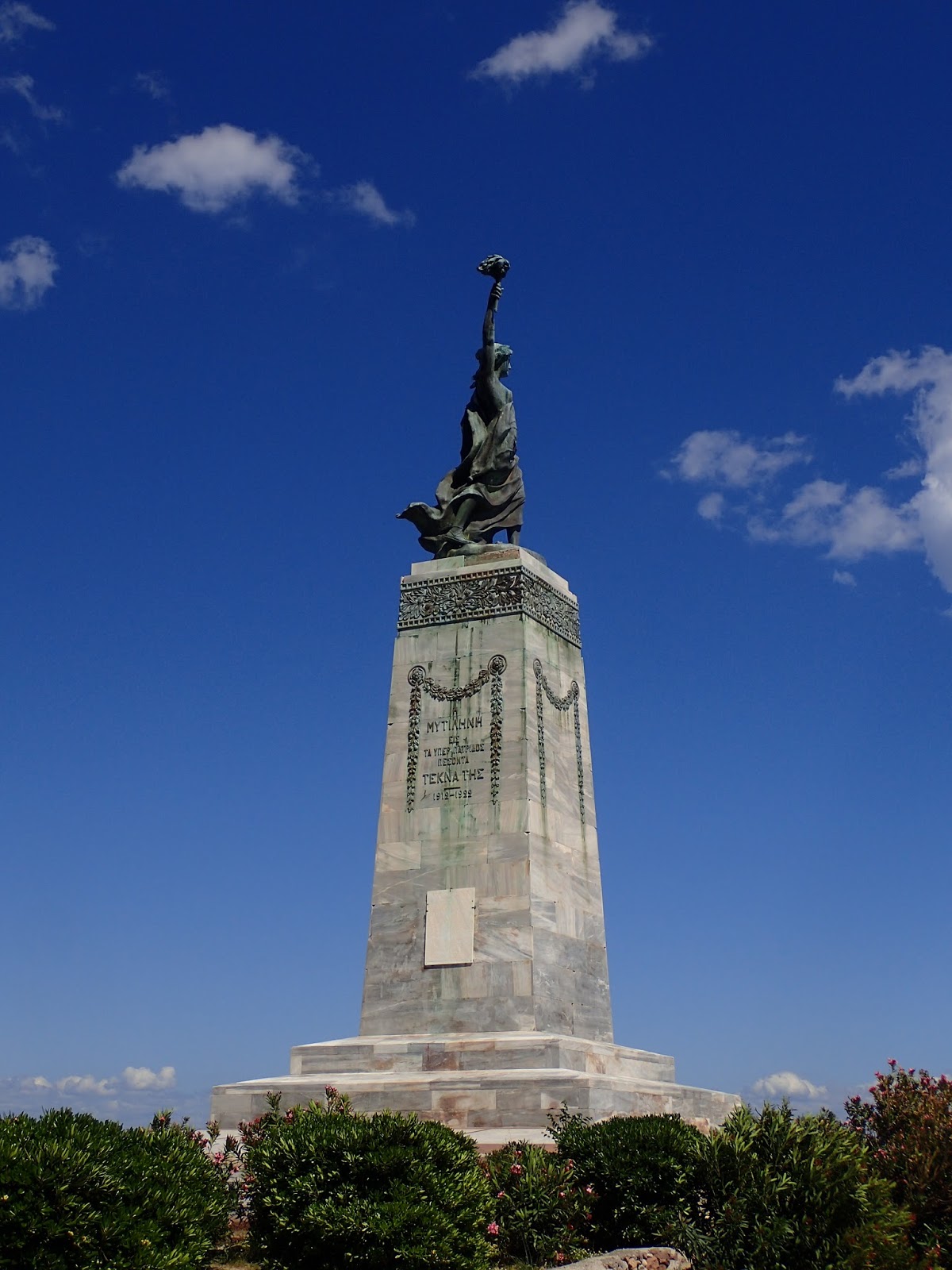 This is a gift to the island from the people who emigrated from here to New York City. It could not be more fitting: Lesvos has been much in the news, here and around the world, because of how many refugees have passed through here. Ai Wei Wei’s exhibition at the Cycladic museum in Athens has the crisis as a focal point, and the images recorded by many local photographers open the exhibition-

That is one of the reasons we are here- to see how the Island is dealing with this tremendous crisis and to show through our experience how it impacts a visitor’s experience. It impacts it tremendously- if you want to be inspired by a population who responds to the need of others with grace, if you want to support an island that has done so much on behalf of us all, then you should come. The only concrete signs we saw of the refugee crisis were signs in Arabic- at souvaki places, and on the public buses. 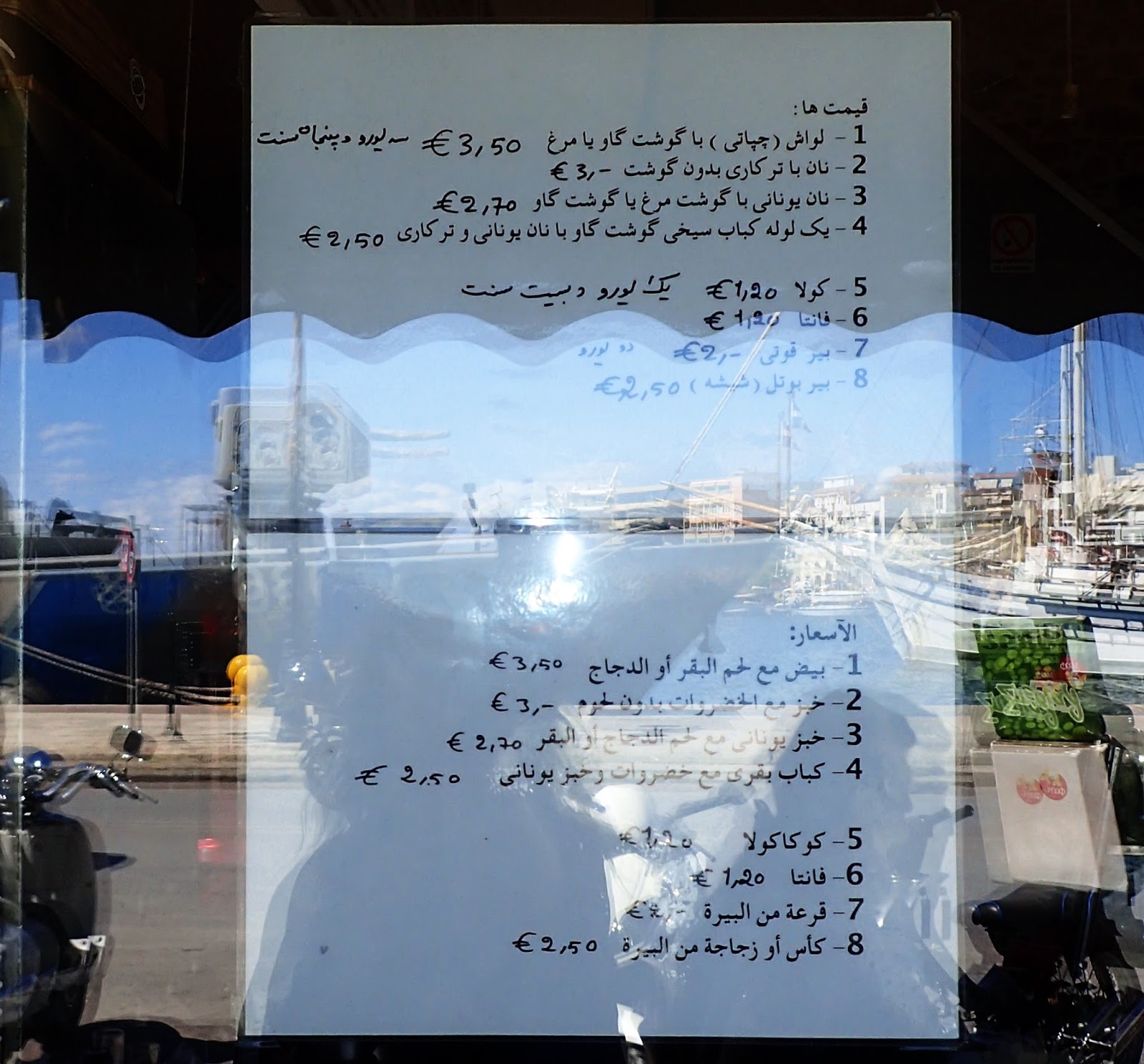 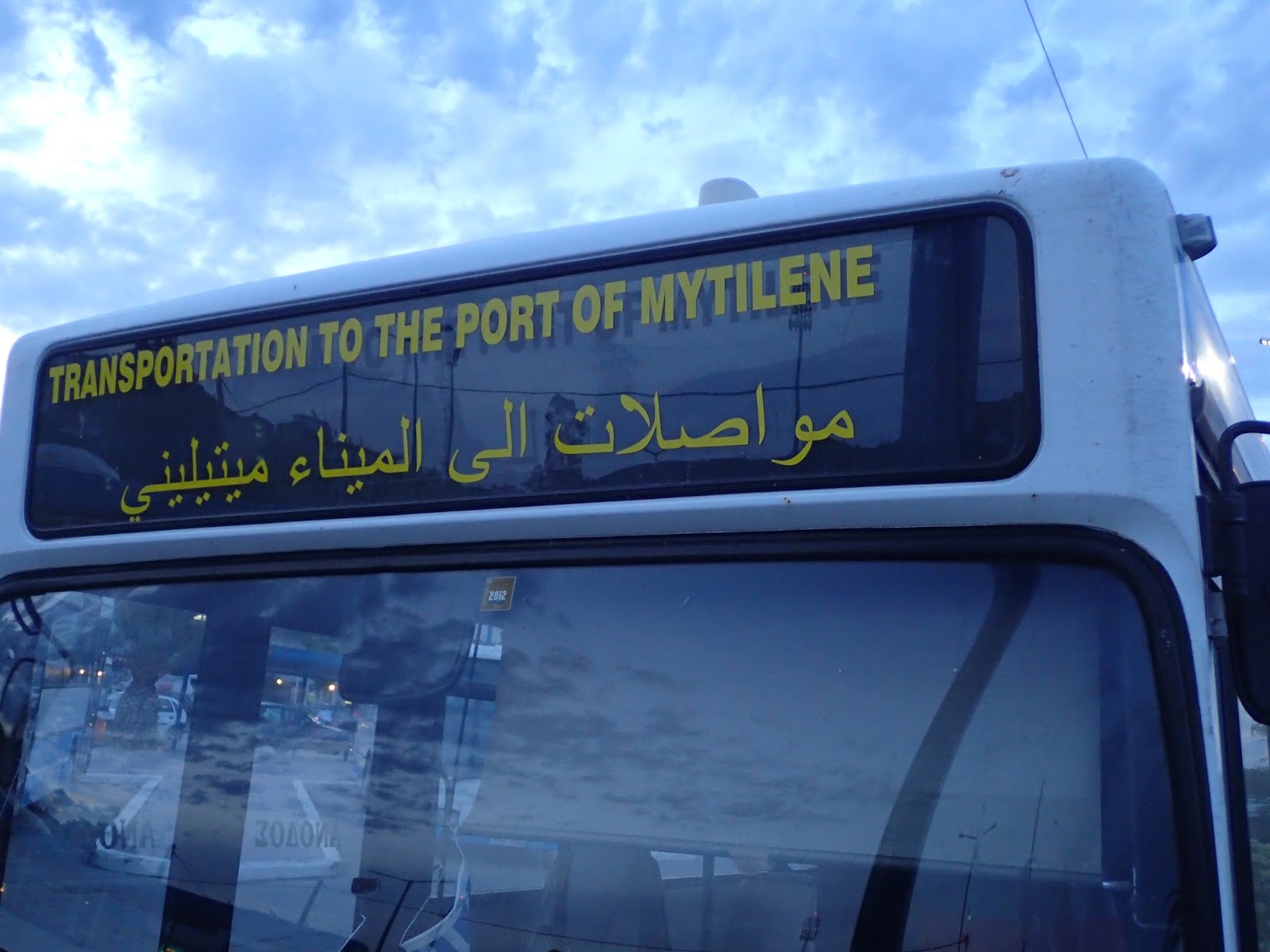 What’s an island without a marina? What’s a marina without a yacht club? What’s a yacht club without a great kitchen, and some Frank Sinatra and Amy Winehouse? Those are not questions we had to answer, because we spent several happy hours at the Marina Yacht Club with its adorable, unpretentious, and surprisingly young owner Eirini, enjoying all those things. We tried dish after dish- all playful, delicious, but honest and real- exactly what you want to eat as the masts cast ever longer shadows. Best soundtrack, best wine glasses, best view, best hostess. Go. Tastes like holiday. 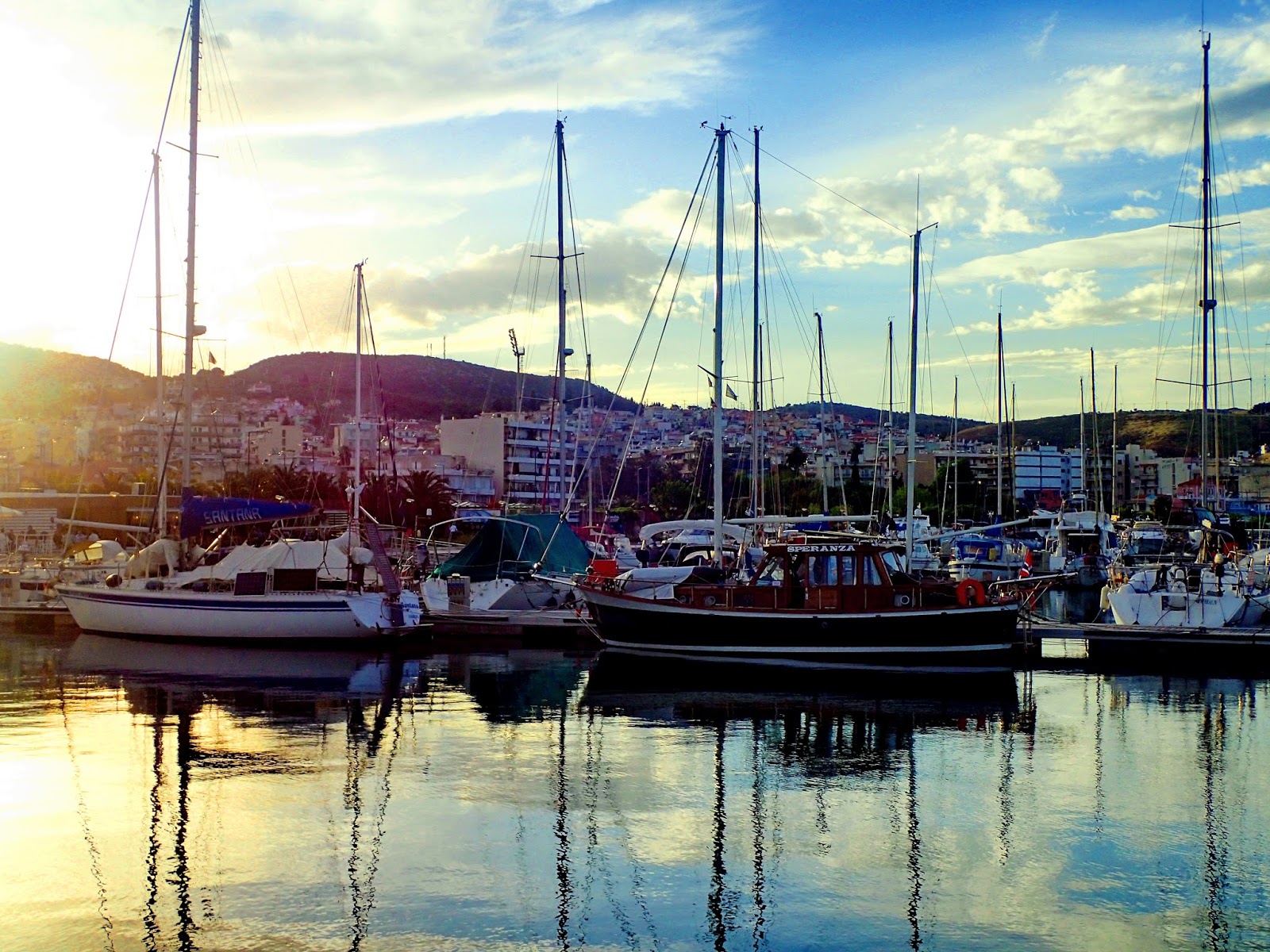 We loved this little city, crammed with mansions and little boats, with its beautiful museum and outsized cathedral, and its boutique hotel and dining by the docks. We loved the people most of all – for their culture, warmth, and virtue. Lesvos is a perfect holiday destination, and Mytilene is the first taste.

For information on visiting Lesvos, try this site: http://www.lesvosgreece.gr/

A fabulous party at the EVA distillery in Mytilene where we got to know Lesvos’ classic drink: