Everyone raves about the Time Out Market Lisbon at the Mercado da Ribeiro. Now we see why – this novel culinary destination is an essential Lisbon experience.

I like a classic southern European central market, fish heads and all. But this turned out to be the best, and most authentic, market experience I’ve ever had. It has all the energy of the southern-European, intimate, high-contact shopping experience. But none of the chaos or questionable hygiene. This is a prime destination for culture and cuisine on a visit to Lisbon.

History of the Mercado da Ribeiro and the Time Out Market, Lisbon

The historic Mercado da Ribeiro has all the presence and mood of a grand European central market hall, surging with energy. This central market hall in the Cais do Sodre is part of the story of Lisbon. The Marquis de Pombal set up the first Mercado da Ribeiro, near the current spot – you’ll know his name from the Pombaline architecture of the Praça do Comércio and the surrounding Baixa. He re-imagined Lisbon after an earthquake in 1755 had leveled it. The market opened in 1771, one of a network of several.

Part of the Mercado da Ribeiro that we now see was built in 1882. The fabulous cupola dates from 1930, when the market expanded. That distinctive, modified onion dome decorating the top inspired the nickname “Turnip Mosque” (Mesquita do Nabo).

Like in other cities,  wholesale food moved out of the center of town. That happened in Lisbon in 2000. Then, in 2010, the Time Out Lisboa magazine team won the concession for a large part of the market from the city council. Three years later work began, and the Time Out Market Lisbon opened in the spring of 2014

The Time Out Market Lisbon Experience

Fine authentic details preserve the atmosphere of the Mercado da Ribeira. This being Portugal, that means beautiful tiles. Those in the market’s entrance announce the essentials of life on sale inside the Mercado da Ribeira – from langoustines, to fresh flowers. As soon as you enter the grand main hall, the scent of butter, sugar and egg greet you. That’s logical; this is, more or less, the signature scent of Lisbon. It comes from the superb and ubiquitous Pasteis de Nata. On your left is Time Out Market Lisbon’s outpost of Manteigaria. Their stellar pasteis de nata are baked fresh throughout the day. People enjoy them still warm on the spot, standing up.

All around the edges of the great hall are the outposts of Lisbon’s most interesting chefs, food artisans, and purveyors. The selection is curated by the Time Out Lisbon team. Everything is excellent.

In the center, there are bars for drinks, coffees and juices, and tables to share with other visitors. There is also a set-up for workshops and events – more on that later. And also, there’s the best in non-food shopping. Actually it was shopping for people who don’t usually like to shop. A Vida Portuguesa’s shelves are stocked with everyday items that have generations of history. These are icons of Portuguese culture, to use and adore at home.

Dining at the Time Out Market Lisbon

Food is central to the experience, as it always has been at the Mercado da Ribeira. If you’ve come to Lisbon in part to explore the cuisine, then you’ll find that Time Out Market Lisbon is the epicenter. From traditional purveyors of artisanal foods to the most innovative chefs, this is the place to sample the best of both traditional and auteur cuisine.

For a casual lunch, we first had the classic homestyle dish Bacalhau à Brás. Crisp matchstick potatoes, sweet onions, and generous flakes of salt cod were bound with with barely set egg. This was from veteran chef Miguel Castro E Silva, a chef originally from Porto. He’s famous for his superb renditions of Portuguese classics. His motto is promising: “Fearless Tradition.” Then at the next counter, the young two star Michelin chef Henrique Sá Pessoa‘s bright octopus dish dazzled us. Fat chunks in a delicate marinade kept their ocean tang.

We ordered our dishes from the respective counters, and got a device that would buzz when our dishes were ready for pick up. Then, at O Bar da Odete, we chose from wine critic Odete Cascais’ selection of all Portuguese wines. This will make you want to learn more – Portuguese wine is worth planning a trip around – maybe to the Douro Valley, for instance. After finishing every smear of rich eggy sauce from the Bacalhau à Brás, we tried a flourless chocolate cake, crisp on top and nearly back within, with another glass of wine. The common dining area is festive, and constantly bused by cheerful personnel.

The Time Out Market Lisbon offers a novel, and very affordable, way to try the best dishes of Lisbon’s top chefs. It’s an ideal combination of fine dining and closer-to-cantina prices, with excellent portions. This is a great way to learn about what’s going on in Lisbon’s culinary scene.

It’s also the place to taste the unbelievable bounty of the sea, preferably with as little done to it as possible. Portugal has top quality seafood. There is nowhre better to experience it than Marisqueria Azul. We sat at the counter and started out with crisp, briny oysters on the half-shell. We’ve never had better. A display before us that put 17th century dutch still life painters to shame included spiny crabs, colossal vermillion prawns, lobsters, and unassuming, unexpectedly succulent barnacles. All the while, a cheerful staff casually and superbly prepared dishes to order, right at the counter.

Sea foods fresh from the tank were cooked right at the bar.

Enjoying raw seafood was a highlight of the Time Out Market Lisbon experience. Because of the such evident standards of cleanliness and freshness, we ate with sweet confidence. We love raw seafood. But if a raw bar opened at the Varvaieikos market in Athens or the Kapani in Thessaloniki, we probably wouldn’t be eating there.

Learn How to Cook Something Fabulous at the Academia Time Out

We fast acquired a taste for Pasteis de Nata, which we found all over Lisbon, including at the Time Out Market Lisbon. These egg custard tarts transcend that humble description – silky and rich with egg yolk, aromatic, and blistered until blackened in patches on top, barely set and creamy in their delicate and flaky shells.

In the cheerful open space of the main hall of the market, there’s a well appointed open kitchen, outfitted with several stations. This is the Academia Time Out. They host a variety of cooking workshops of all levels, some with clever themes (something like a dinner party menu for difficult friends was one of the choices when we were there). Pasteis de Nata were the focus of one workshop, and there was nothing I’d rather have brought home from Lisbon than a way to enjoy Pasteis de Nata at home.

We had a charming instructor. When we arrived we found stations for two with everything we needed, with our ingredients all measured out. We had earpieces to hear instructions against the background of the cheerful noise of the market hall in full late-afternoon swing. First, we made the custard, which we cooked and thickened slightly with flour before filling the shells. Then we pressed the pastry into half of the tart forms. Initially, just half went into the oven first so we could see how to improve on our technique. We all turned out a second perfect batch. After I came home to Greece, I tried them out with the recipe from the workshop, and had identical results.

Under the same roof as the Time Out Market Lisbon, the traditional Mercado da Ribeira still operates. The main hall has local and imported produce. It’s a beautiful display. Along a side aisle, you’ll see the freshest local catch.

For a complete experience of the Time Out Market Lisbon and the traditional Mercado da Ribeira, you can rise early to shop with the chefs, followed by your first café com leite at one of the market cafes. Then check out the Time Out Market while it’s still relatively early – it opens at 10:00. This way you can plan what to have in the evening, after a full day of sightseeing in the meantime.

For information on visiting the Time Out Market Lisbon, including a complete catalogue of the experiences to be had there, please see here.

We had a fantastic time in Lisbon, and the Time Out Market ended up being a highlight of our stay. 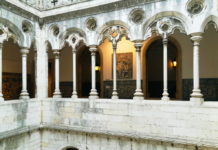 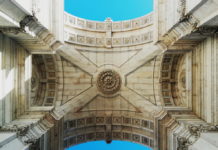 3 Days in Lisbon: What to Do in Lisbon in 3 Days