The first impression most travelers have of Lisbon, Portugal, are of the tiles. Lisbon is awash in color. Ornate glazed tiles cover the facades of buildings, from simple to grand. Visiting the Tile Museum of Lisbon – the Museu Nacional do Azulejo – gives you insight into this unique characteristic of Portugal. Here, the entire history of the Portuguese tile unfolds, from its beginnings to its use in modern and contemporary art. This was one of the highlights of our three days in Lisbon.

The Museu Nacional do Azulejo has a fantastic setting – the Madre de Deus convent, founded in 1509. In addition to the many displays of historic Portuguese tile from throughout the centuries, you’ll be seeing many splendid examples in situ. The convent has its own church, dating to the Barque period. It’s splendid, featuring gilded and carved wood, paintings, and of course, many tiles.

How to get to the Tile Musuem in Lisbon

From the Praca do Comercio, you can board the bus 759 – “Estação Oriente.” Ride nine stops – it takes a little over 10 minutes – and get off at “Igreja Madre Deus.” The entrance to the museum is just a minute away on foot.

Visiting the Tile Museum in Lisbon – Learning about the Azulejo

This lovely word for tile comes originally from the Arabic ‘azzalij’ or ‘al zuleycha.’ It means a ceramic piece, glazed on one side.

The Early History of the Azulejo in Portugal

The first Azulejos were glazed tiled pavements of one color, in use since the 13th century. But the aesthetic potential of the Azulejo was introduced by the Moors, initially to Spain, as one can see in the Alhambra of Grenada, and in Seville.

The Development of the Art of the Azulejo – Cuerda Seca

Throughout the 15th century, the technique of cuerda seca developed. This means, roughly, ‘dry string.’ The effect of the technique on decorative tiles was great. Initially, colored glazes would run into one another during the firing process. Then cuerda seca changed this. By using an oil-based substance, often mixed with something black such as manganese carbonate, the water-based glazes remained in place and separate from one another. The method made it possible to keep sharp outlines and clear patterns. Elaborate and intricate patterns developed.

The Auzejo in Portugal in the 16th century – King Manuel I

King Manuel I, on a visit to Seville, saw the Spanish – Moorish tiles and brought the taste for them back to Portugal. Azulejos became fashionable, indispensable. The covered walls. The Sintra Palace, and particularly the Arab Room, has fine examples.

The Azulejo and “Horror Vacui”

The Portuguese adopted the ornate Moorish aesthetic tradition. Along with it, they also adopted the aesthetic philosophy of ‘horror vacui.’ As it sounds, this means a horror of empty spaces. In physics, it means that nature abhors a vacuum. In art, it calls for filling empty surfaces with patterns and decoration. The effect of horror vacui on both the great monuments of Portugal and on the urban landscape of Lisbon is fantastic. Azulejos define the urban aesthetic of Lisbon.

Azulejos initially were abstract geometric patterns, as above. Or they had decorative botanical motifs and interlocking geometric patterns. Azulejos were Moorish in origin. Thee abstract and botanical designs are consistent with Islamic design, which forbids representational imagery. These aesthetics are still popular today. You’ll still find elaborately patterned tiles that create interlocking and connected patterns on Lisbon’s shimmering facades.

Tiles and Style – Visiting the Tile Museum of Lisbon

When we think of Portuguese tiles, we nearly always picture the elaborate ornamental interlocking patterns over a large surface. At the Museu Nacional do Azulejo, you’ll be able to see that tiles have been an essential medium throughout centuries of Portuguese art. Azulejos express all the dominant artistic trends of the eras in which they are made – from Renaissance, to Rococo, to Art Deco and Contemporary. Tiles are an essential medium in the Portuguese aesthetic vocabulary.

Throughout the 16th century, there were more and more European motifs. Among these were large scale narrative scenes, both secular and religious. Polychromatic tile pannels depicted mythological, allegorical, and religious scenes, in a Renaissance style.

The Blue and White Panels

Production then shifted to Portugal when King Pedro II stopped the import of tiles in 1687, until 1698. Academically trained Portuguese artists started designing scenes rendered in blue and white tile. These eventually became the dominant fashion. The began to take precedent over the abstract motifs and repeated patterns.

The Golden Age of the Azulejo – the 18th Century

The Golden Age of the Azulejo, in the late 17th and beginning of the 18th centuries, was a time of incredible productivity. There was demand not only from within Portugal, but also from the Portuguese colony of Brazil. It was not just for churches and monasteries, but also homes. These were decorated inside and out with tile work. The 18th century work expressed the Baroque style of the era.

Azulejos in the 19th Century

This was another significant era in the development of the role of the Azulejo in popular culture. In the 1840’s, immigrants from Brazil opened a tile factory in Porto. They brought with them the Brazilian fashion for using tiles to decorate facades of houses. The fashion caught on. Along with Fado, bacalhau, and pasteis de nata, tiles on facades are one of the first things we think of when we think of Portugal. In the 19th century, industrial mass production methods were in use. Fine hand-painted tiles remained important.

The beginning of the 20th century brought the popularity of Art Nouveau tile designs. The medium proved ideal for ornate and stylized designs inspired from botany and even, very beautifully, insects. Works by Rafael Bordalo Pinheiro and José António Jorge Pinto are fine examples of the genre.

In the 1930’s the Social Realist artist Carlos Ramos made interesting use of the Azulejo. He applied the blue and white Delft aesthetic that was so popular for allegorical and historic scenes in the 17th century to scenes celebrating the contribution of the working class. In panels like Fabrico do Pão (the Bakery) and A Ceifa (The Harvest), the worker is elevated to the status of an allegorical figure, a hero.

The artist Jorge Colaço, working in the same era, saw the Azuejo as an essential expression of Portuguese culture, the preeminent national medium. His blue and white panels reflect his distinctive painterly style, impressionistic and romantic. His agricultural scenes and fishing scenes reflect Portuguese life.

More modern woks too are on display at the Tile Museum in Lisbon. Maria Keil’s Pastores (Shepherds) of 1955 plays with composition and the juxtaposition of the figurative and the abstract. The 1957 panel by Querubim Lapa for the Portuguese pavilion at the Comptior Suisse of 1957 is a highly stylized figure reflecting a popularization of cubism and abstraction.

A section from a wall covering of a Lisbon metro stop of 1989 by Julio Pomar captures effectively the figure Fernando Pessoa – 20th century poet, writer, and philosopher – in an impressionistic sketch in faience on white tile.

Azulejos are also the medium for this work by Lourdes Castro, entitled “Welcoming Shadow” (1980-1990). The title suggests the life-sized welcoming figura de convite. These were placed at the entrances to palaces or stairs in the 18th and 19th centuries. Such welcoming figures are unique to Portugal.

The Cafe at the Tile Museum in Lisbon

The Museu Nacional do Azulejo has a lovely garden cafe with a self-serivce restaurant.

Visiting the Tile Museum in Lisbon – the Bookstore and Gift Shop

This small store is as classy as the Museu Nacional do Azulejo itself. Try to leave enough time. We wish we’d had more, but I had a class in how to make Pasteis de Nata at the Academia at the Time Out Market. 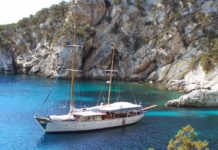 Time Out Market, Lisbon – at the Mercado da Ribeira