As you drive from the wonderful port city of Volos towards Pelion, you’ll notice a narrow gauge train track. It’s thrillingly, perilously close to the sea’s edge. Work on this track from Volos to Ano Lehonia was started in 1892. Then, in 1900, they decided to extend the line to the mountain village of Milies, stopping at the watermill below the town. The train ran until 1971.

The Artist and the Engineer

Evaristo de Chirico was the engineer in charge of the construction of the railway. But we of course know the name mainly from the work of his son, the surrealist painter Giorgio de Chirico. Looking closely at some of his works, you’ll often spot a steam train somewhere in the background. After taking this trip, you will know the source of the rows of arches that feature in so many of his work. A dramatic stone bridge of many arches is one of the highlights. This is not, however, the de Chirico bridge. That bridge is made of iron and is unusual in that the bridge is straight and broad with the narrow tracks curving across it.

The revival of the Pelion Train

After 25 years, the train was back, starting again in 1996. It’s now an electric engine. So we asked the conductor when was the last time a steam engine was used on the Pelion train. “2007” he answered. Even without the old-fashioned power source, this is an authentic, atmospheric experience. The four small cars are have wooden benches running along the sides, facing each other. When you book your seats have this in mind. Note the direction of the the train, and that the sea is off to the right on the way to Milies, and on the left on the route back to Ano Lehonia.

The sweetly colored petite stations all along the line of the narrow gauge track (60 cm) have pitched roofs and fairy tale lacy wooden eaves.The train departs from Ano Lehonia at 10:00 am. We enter the cars from each end, stairs ascends to a small balcony we stand on to best enjoy the view throughout the journey. even though the journey itself is just 15 km, it takes a leisurely hour and a half, including a brief stop in Ano Gatzea. We’ll slowly climb from an elevation of 75m to 400m at Milies. This is a pleasure in any season, but particularly well suited to the fall.

Right before a tunnel, we stop at the tiny mountain village of Gatzea, surrounded by olive trees. In the station is a photograph of the train when it was the main means of transport, busy with people. there’s a cafe for a thick Greek coffee or a local “portokalada” (orange soda).

Ano Gatzea has a small and delightful Olive Museum, in a tall cellar of a stone house from 1926. Here you’ll find artifacts originally found on the property, for the sorting of olives and the storing of oil. There are also agricultural tools for olive cultivation, and and also an enormous barrel- three meters in height- for curing olives. Displays detail the entire process from cultivation to curing, oil pressing and soap making, but as the stop is just 15 minutes, you’ll have to take in just the half, and the second half on the return journey.

As the train approaches the Milies station, shortly after crossing the de Cirico bridge, the olive trees give way to dense green forest- plane trees and evergreens. The ruins of a watermill are next to the station, and just a few steps above are an inn and restaurant with a fabulous view. This is not yet Milies proper though. The town square is an 800 m climb uphill, along a rough, ridged donkey path of slick stone. Hiking boots make the walk much safer and more pleasant.

All respectable village squares are centered around an enormous plane tree, Milies no exception. There are couple of places to get a tsipouro with meze or some hearty mountain fare. There’s also a folklore museum, and the 18th century church of Taxiarchis. The entire interior is magnificently, brightly painted- including faux marble and capitals. However, this was all in blackness until a few decades ago. Soot from the furnace had covered the murals, hiding them completely from view. It must have been an extraordinary discovery.

Milies is not short of tourist shops and tour uses crowding its narrow streets. However, you can easily avoid them by going uphill, stopping at the church of Agios Nikolaous and seeing the grave of scholar of the Greek Enlightenment Grigorios Konstantas. After that, continue to the woods for a hike among tall pines with marvelous purple bark.

The Views of Pelion

Although the Pelion train arrives at Milies at 11:30 and departs at 3:00, make sure you get back down the hill in time. There’s only the one train, and there may not be one the next day, or even the next month.

Now the best part of the journey starts- the light is perfect, and you concentrate on the views. The Pagasetic Gulf stretches in the distance below. Silvery olive trees with their gnarled trunks dominate the landscape. These are some of Greece’s most thrilling and intimate vistas, all taken in slowly, with the rhythmic sound of the train. This is an experience not to be missed. 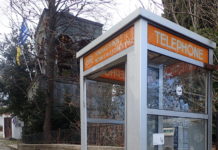