One of the great things about the Mediterranean lifestyle is that you can so easily slip away from it for a quick, strong dose of Mitteleuropa. Budapest charms without even trying. 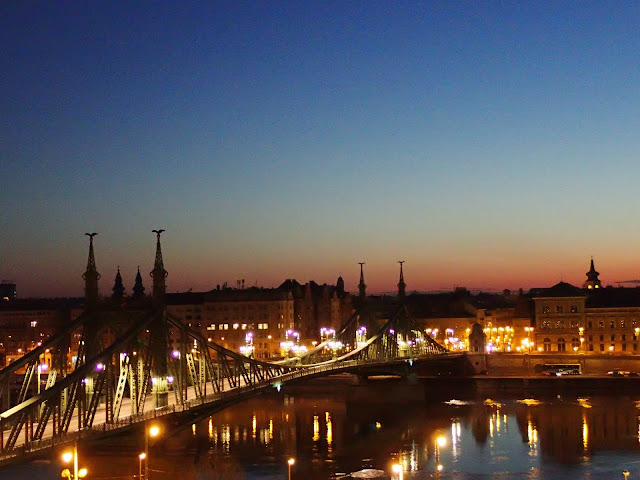 What makes a perfect dose of Mitteleuropa? For me, architecture and urban planning. Budapest had money when it mattered- historicism run almost amok, proportion ideal, but as to scale… well, when my mouth fell open on seeing the Parliament building on the Pest side through the windows of the tram #19 in Buda, 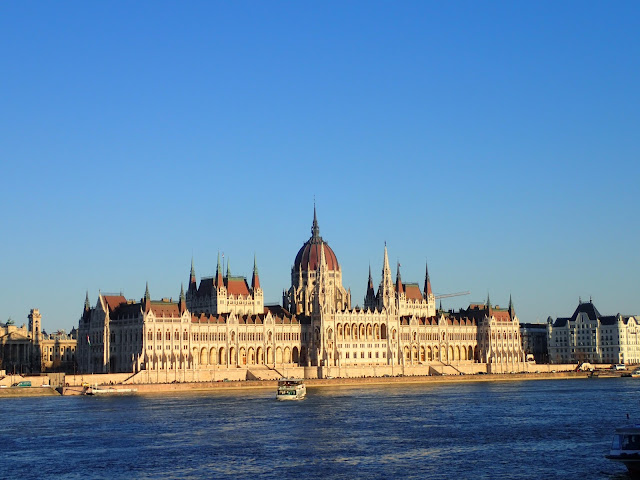 the man across from me said “Truly. It is a little embarrassing, so very big….” But- jaw dropping grandeur aside- I wanted history, I wanted context, and most of all I wanted to know what makes Budapest, Budapest. I wanted identity. 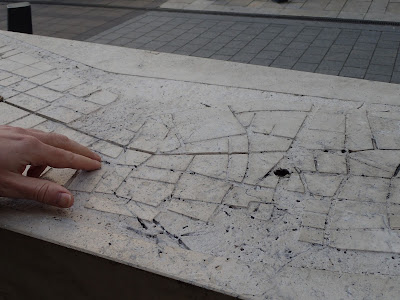 With Architect Arne Hubner of the Guiding Architects team, I will see- and feel- just that. A hallmark of Budapest is texture- not metaphorical texture but actual, physical texture. The contemporary station of the metro I took to get here was warm and rich in poured concrete and that earthy oxidized steel like Richard Serra uses- I couldn’t take my hands off it. The Főutcája- “main street”- beginning at Kálvin tér where we meet greets me right away with the same sense of textual counterpoint- granite for the street, and softer, warmer travertine for the pedestrians. This walk will take us through many facets of the city’s style. 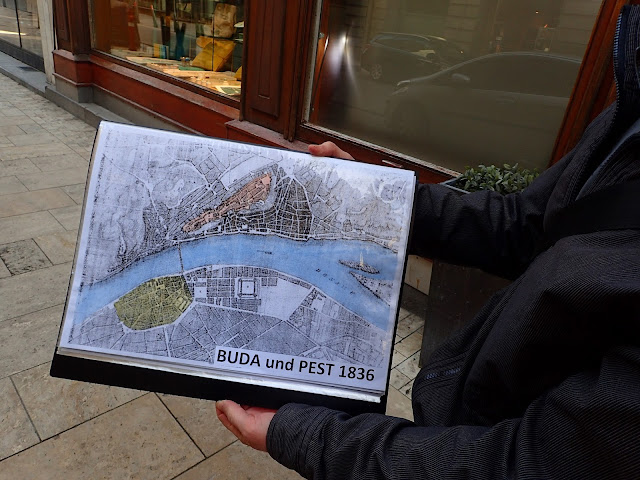 1867 is a pivotal year in the history of the city. The Austro-Hungarian Compromise brought about the Dual Monarchy (a single Head of State- the King of Hungary and Emperor of Austria as one), a huge increase in autonomy for a Hungary previously under Military dictatorship, all aspects of life under Austrian control. It also meant there was money- the 1870’s, ’80’s and ’90’s were a period of monumental building in Budapest- itself born in this very era, with the merging of Buda, Óbuda (old Buda) and Pest. The city had a population of about a million at the time- making the grandeur per capita ratio pretty extreme- the number and size of opulent buildings are suited to a city many times larger.
What was going on right before that? Lots of large scale, 2 story buildings and Baroque churches. 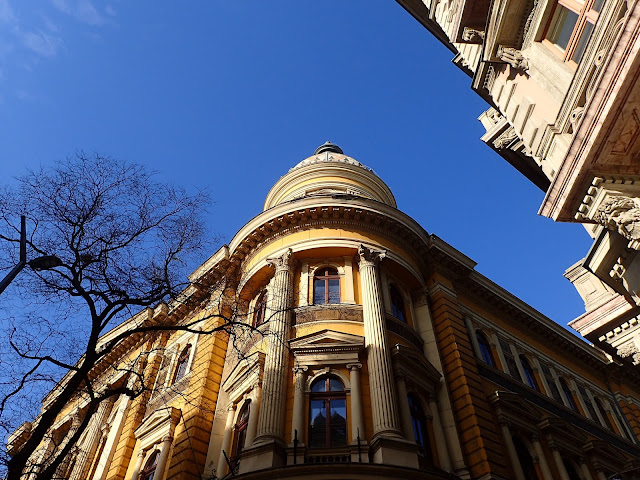 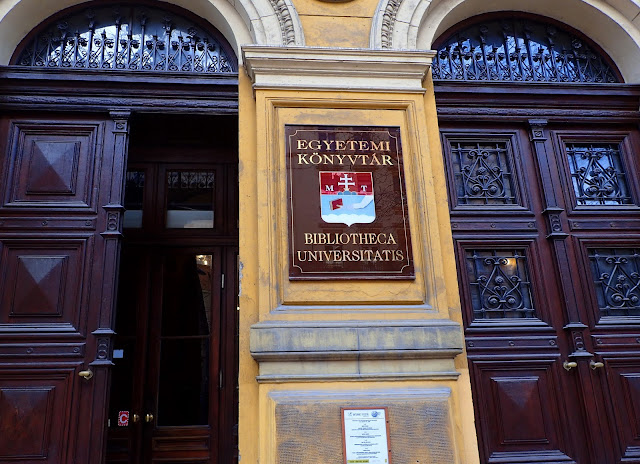 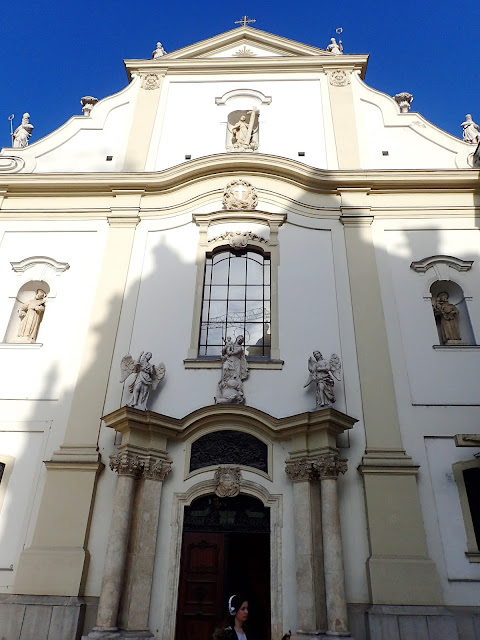 The 1890’s saw the onset of private building commissions. It also saw the advent of advances in construction technology. These combined- there was a new freedom from the historicism that dictated the style of public buildings, and with that, the means to realize this new aesthetic. Arne has cleverly directed my attention to a dull, multi-story parking garage as he gives me this background information. I’m here primarily for the Secession experience; I have some idea of what to expect. When we turn around, Szervita tér #3 surprises me all the same, its facade entirely of curved glass, the weighty (in every possible sense) most improbably supported. It’s beautiful. 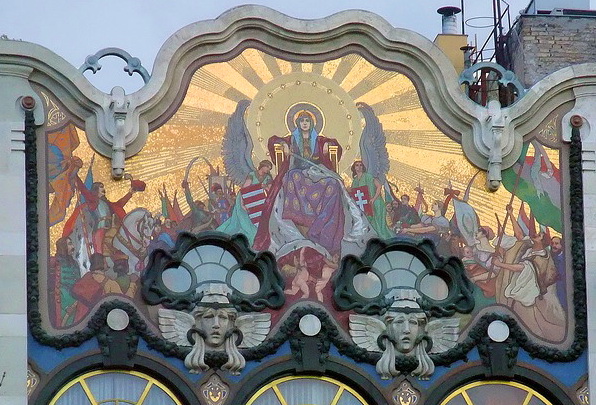 Ármin Hegedűs’ (the name means “violinist”) building, originally a luxury department store with office space above, illustrates a lot about things I already know about. Then Arne narrates the mosaic for me, the missing piece that makes it beautiful.  The heroic mosaic is not an abstraction of ideals but a very specific construct of Nationalistic identity. The central goddess Hungaria is victorious, flanked by national heroes Ferenc Rákócz,  leader of the early 18th C uprising against the Habsburgs, and Lajos Kossuth, freedom fighter in the revolution of 1848. Radical structure and avant garde style unite to convey a deeply patriotic message, and that is what makes the Hungarian Secession interesting- it is, in essence, a double secession- forging aesthetic identity against the prevailing historicist styles, and a distinctly Hungarian identity against a past of partial subjugation to Austria. Next door, the Jonas’ brother’s building winks at Vienna though, in a very pleasant take off of Otto Wagner’s Postsparkasse- the visibly attached panels coating the iron frame. 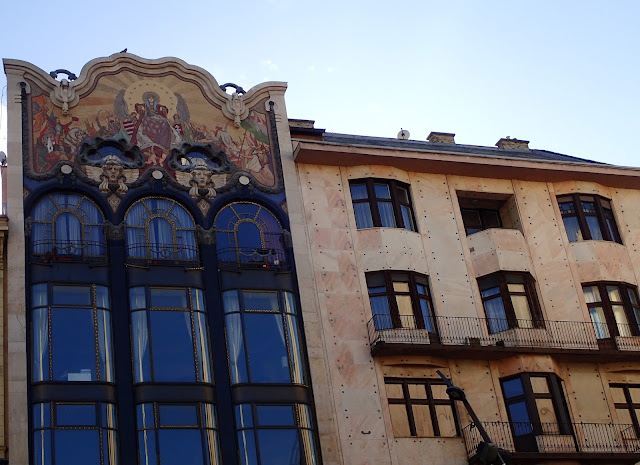 At the heart of a Secession tour of the architecture of Budapest is Ödön Lechner, father of a distinctly Hungarian Art Nouveau. In his wildness, he gets called “the Hungarian Gaudi” a lot. I mention to Arne that he is at least as innovative, and why aren’t we talking about “the Catalan Lechner”? Arne sheds some bright light on the issue- it is not so much a stylistic issue- reliance on tile aside- but a nationalistic one- as Gaudi worked to develop something distinctly Catalan, so Lechner forged a Hungarian identity, as opposed to an Austro-Hungarian identity. Key to this was materials. The “great plain” covers much of Hungary- this is not a nation God built of granite or marble- it is built of earth. Tile, therefore, is the indigenous material, and one which can express a distinctive identity- folkloric, and often whimsical. There is also lots of glazed brick- a local, and democratic, material. I mention the appeal of so economically accessible a building material – “Yes. But also- Lechner grew up next to a brick factory- there was a deeper, more sentimental attachment to the material.” His early Art Nouveau Thonet ház – heavy on the Gothic, but not heavy- the curtain wall clearly bears no weight, and is a space for exploring pattern, with a very William Morris feel- Glazed brick is used here to glorious advantage. 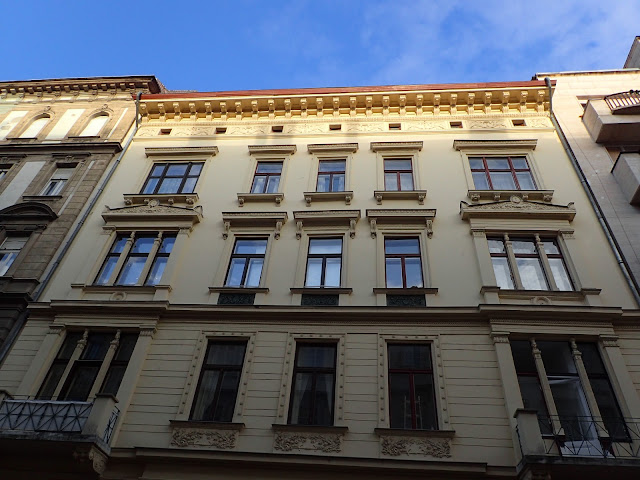 We visit Lechner’s first building in Budapest. Honestly I’d have passed it without looking up, and having it pointed out I can’t see what is radical until Arne points it out- the rhythm is radical- symmetrical, yes, but rather than the standard AAAAA, or even AABAA, Lechner has his huge windows to the sides, for a unique, and then radical, BAAAB rhythm.

Our tour ends in a grand and tranquil square. The enormous Beaux Arts building flanking the whole of one side is the former Stock Exchange is “available.” The world’s prettiest US Embassy- Secession style- is off to one side (and cannot be photographed). Just behind the Embassy is Lechner’s Postal Savings Bank, a highlight of the city but you can get no distance on it. I went to the roof of St. Stephen’s the next day to do so, but too much distance by far. 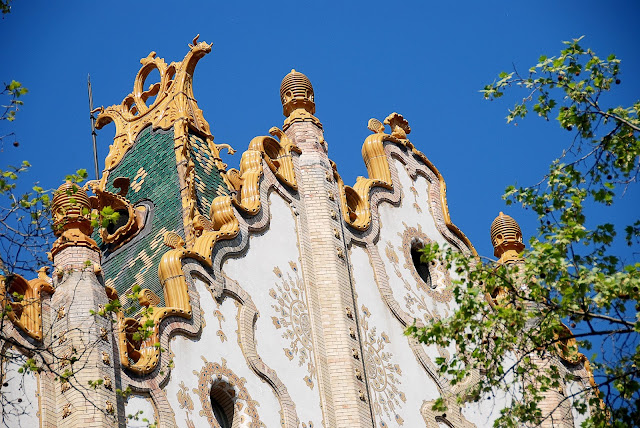 It is a glorious thing- opulent, esoteric, and deeply democratic with its use of brick and tile. There is a motif- the beehives allude (sweetly) to the building’s purpose. The building embodies the deep sense of identity- and whimsy- that characteristic of this classic European capital.

I loved my stay at the Gellert 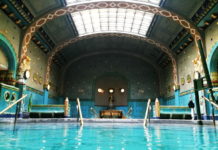 2 or 3 Days in Budapest Itinerary 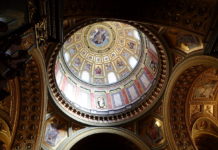 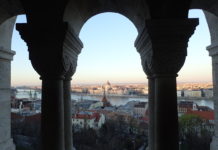