"If you haven't been to Sounio, then we're not discussing anything else." My friend Chrysoula, also a travel blogger, was decisive. It was not so much advice as an injunction.

Watching the sunset from the temple of Poseidon at Cape Sounio a key Greek experience.

And, it has been for a while apparently.

Cape Sounio is remote, perhaps an hour from the city, along an ever narrowing road that hugs a rugged, winding coastline. This adds to its appeal.
Why build such a grand temple in such a wild spot? Because of the wildness. Winds funneling through the strait between Andros and Evia, and the strait of Chalcis, made this passage the most treacherous of all. Only after passing the temple could a ship in ancient seas reasonably look forward to coming safely to harbor. Who can say how rough the seas would have been were it not for this temple to pacify Poseidon.

So, imagine those earlier travelers while you applaud the sunset (really- everyone claps spontaneously!), the sea benign below.

Nothing sells an attraction like celebrity guests. If you ask the guard at Sounio, she will point out Byron's name. It seems vain. But, given Lord Byron's services to the nation, it's at least not irrelevant. How did it come to be here though? Lawrence Durrell weighs in:
“In Byron’s case, it seems obvious that he did not groove his name himself at Sounio, for it is not his hand and nothing like his signature. What happened was this: after a heavy dinner, washed down by a fine red Naoussa, his host, overcome with emotion at having the great poet at his table, called for a mason and ordered him to engrave a memento on one of the pillars of Sunion. It takes some finding today, and it is fair to suppose that Byron would not have indulged in such sacrilege by himself; but as a guest, what was he to do?”
(The Greek Islands, p. 232)

What indeed? But Sounio is a sight now- after Byron’s discreet (and possibly by proxy) defacing, imitators followed:

“lt is that Smith and Jones have rushed in with uninhibited zeal to claim their own slice of immortality, and the whole of the Sounion temple is a mass of grafitti today, thick as lace.” (The Greek Islands, same page)

These were not some hoodlums with cans of spray paint and fat magic markers. They were hoodlums armed with chisels and hammers (or more likely armed with privately engaged stone masons) and, over the decades, there were lots of them. Given the advance preparation needed (the hammer, the chisel, the horses….), this must have been a treasured quest. You can imagine them writing of it in their journals- the remoteness, the success of their endeavor. Maybe this passionate vandalism was a rebellion paving the way for a greater one. Raising a tool to antiquity seems deviant. But it wasn’t Greece when the custom began, it was still the Ottoman Empire. Greece was a cherished idea in the hearts of the people who traveled out to this remote cape- yes to deface antiquity. But also to attach themselves to something timeless and monumental, something that- certainly in the case of Byron- they ultimately helped bring back to life.

To go to Cape Sounio:

Many organized bus trips can get you there in comfort, but this is the time to rent a car and hug the curves of the Athens Riviera. 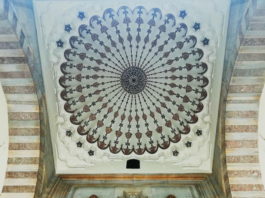 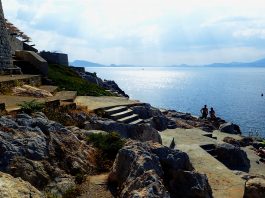 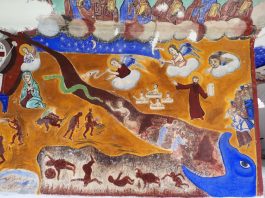 ABOUT US
Hello I'm Amber. I grew up on a beautiful island, far from Greece, but in its ways not at all dissimilar. Read more...
Contact us: [email protected]
FOLLOW US
© All Rights Reserved.