Home Destinations Greece The Perfect Time to Visit to the Acropolis 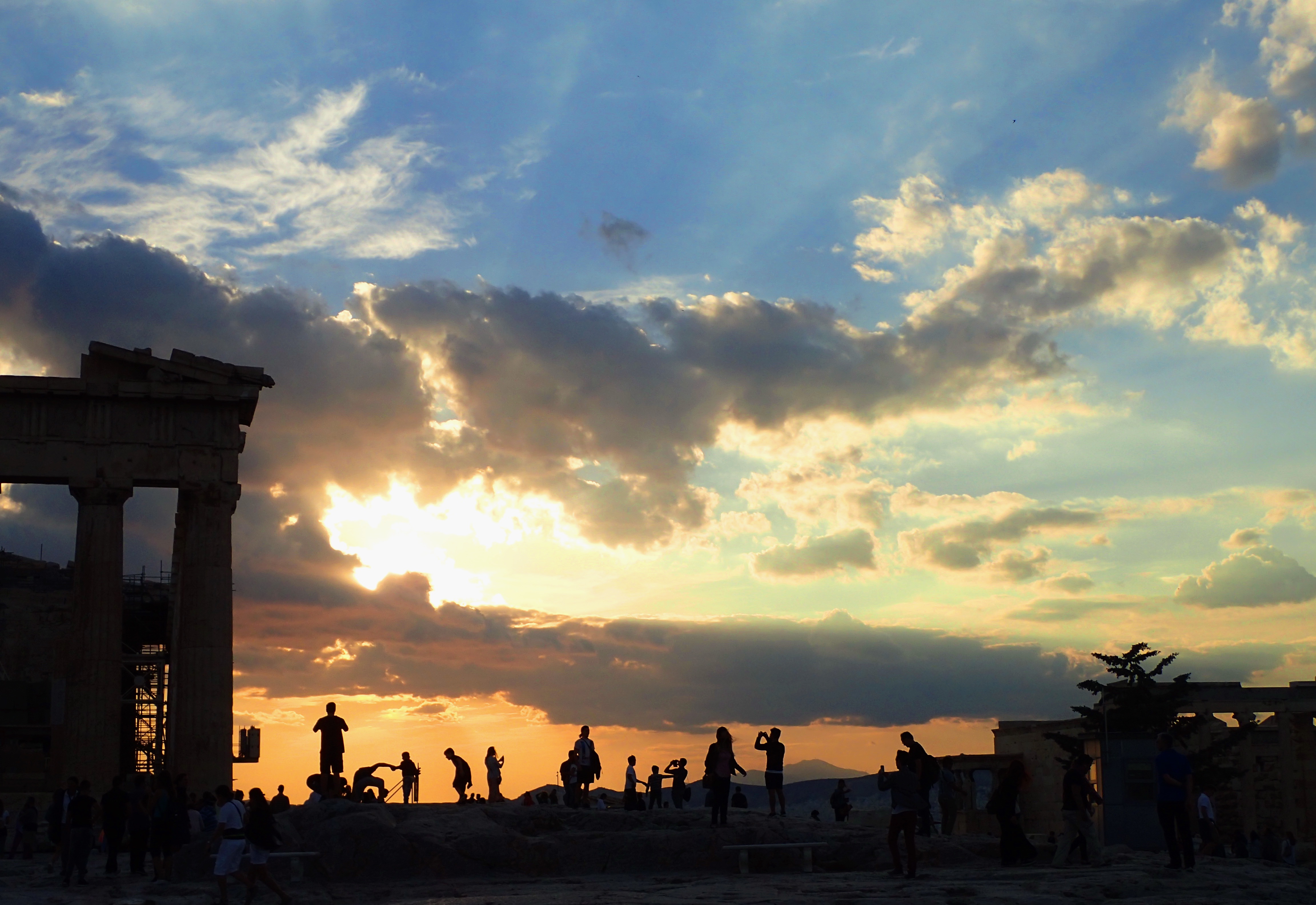 The Acropolis is at its most majestic at the edges of the day.

A favorite family photo captures me at the Parthenon,  chin on my chest, asleep.  We had been here in the light of the “rosy fingered dawn” (ours was a trip with a syllabus). It was not adolescent ennui- just jet lag. That first visit to the Parthenon is an amazing thing, especially since, up until the day before, my experience of the past had reached no further back than Colonial Williamsburg.

Visits after that were less moving. The present intruded: necessary scaffolding, the clanging of machinery, and just so many people in such vivid summer attire.

But on recent chilly Sunday, under a dramatic sky, the monumentality of it all came back. It was crowded, but stark, visitors- many of them Greek- bundled up against the first cold evening. Above the murmur of the crowds was a crisp, patriotic sound- the enormous flag, rippling and snapping loud in gusts of high wind. 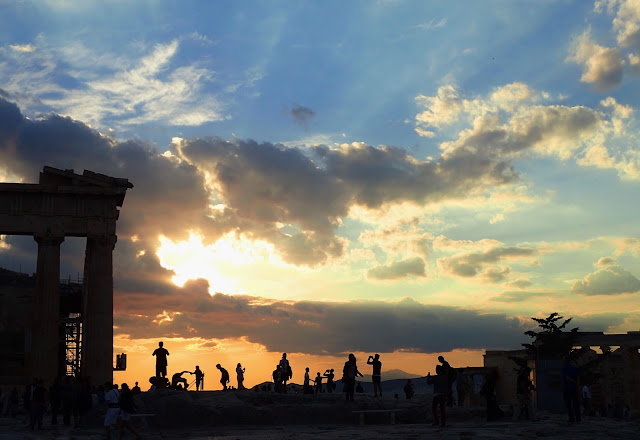 At sundown, the sites close. Guards with whistles advance all around from the perimeter, tightening the circle of visitors. It was a glorious night, and- in a way that never seems to happen in a museum, for instance- a bond arose among the visitors. Many lingered purposely at the edges of the radius, drawing the moment out. Then, at the Propylaia, we were unexpectedly victorious. Our exit was blocked, not hastened.

Always on a Sunday 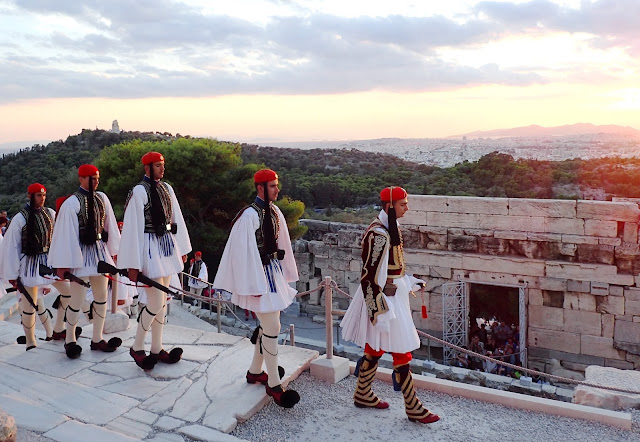 On Sundays, the Evzones (the Greek Presidential Guard), dressed in traditional uniform, ascend the Acropolis in a formal procession. The military band plays the Greek national anthem. They raise the flag in the early morning, and come again at sunset to take it down. These two symbols of the glory of Greece coming together- ancient heritage and the rebirth of Greece (the Evzones wear the uniform of the revolution) is unexpectedly moving.

The earliest visitors will take in the procession in the freshness of morning, in the relative solitude before the crowds arrive. The evening visitors will have the advantage of the hush the sunset invariably invites. 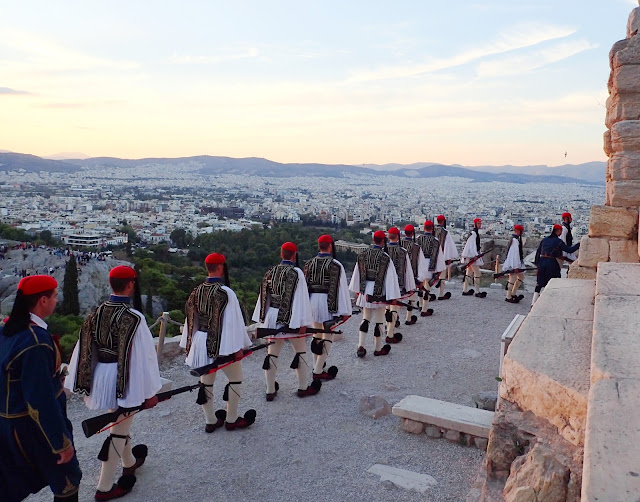 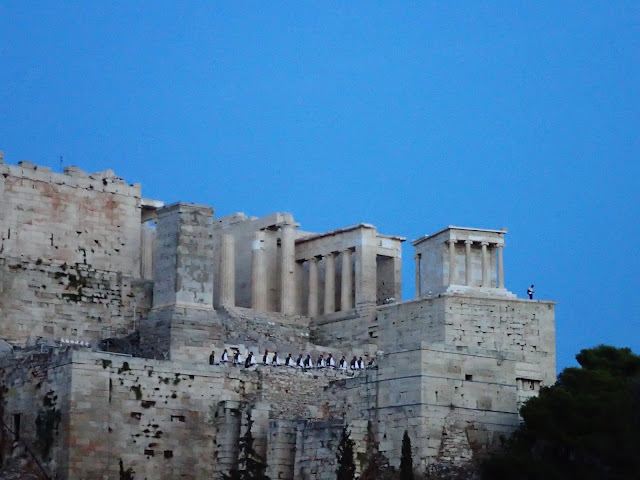 If a Sunday proves impossible, a visit at the very beginning or very end of the day is still the most rewarding. The low sun, the stillness of the hour, makes for a contemplative mood, no matter how crowded.

The visiting hours for the Acropolis change seasonally- check before your visit.

The Acropolis and other monuments and museums are free on the first Sunday of each month, from October to March. 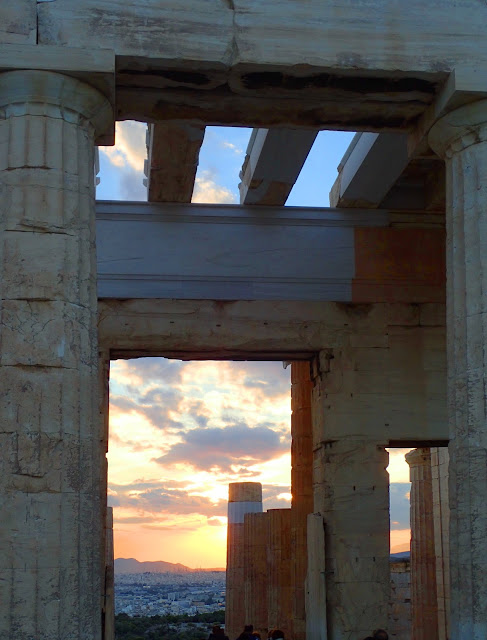