Old Town Thessaloniki is a rambling hillside neighborhood in the embrace of the Byzantine walls. This romantic tangle of cobblestone alleys and traditional houses goes locally by the name “Ano Poli” – the “upper town” of Thessaloniki. This is where the city’s true identity beautifully unfolds.

There are many things to do in Old Town Thessaloniki. Monuments from periods throughout the city’s history mingle in harmony throughout Ano Poli. There are historic and religious sites that stretch back through centuries, even millennia. Five of Thessaloniki’s UNESCO World Heritage monuments are in the Old Town. Some of are famous landmarks. But many more are hidden – Old Town Thessaloniki is a place of secrets and discoveries.

Related post: Best Things to do in Thessaloniki – Sights, Activities, and Cultural Experiences

Things to Do in Old Town Thessaloniki – A Beautiful, Historic Walk

There are traces of many of the city’s eras and cultures – from ancient Roman sections in the Byzantine walls, to a Church over 14 centuries old, to the mausoleum of a Sufi holy man (adored by the Christians, too.)

Of course, even without these charms, you would want to come up here for the view alone, as many locals do. This lush, green neighborhood of traditional houses and overgrown gardens feels like a country village. But when you reach the summit, the whole cosmopolitan city stretches before you around the deep blue bay.

Agios Nikolaos Orfanos – A Church in a Secret Garden

This fairy-tale of a church in its walled garden is in Ano Poli’s lower corner to the east, a perfect place to start your hike amid the cobblestone alleys of the Old Town. A great favorite for Weddings and Baptisms, the 14th century Church of Agios Nikolaos Orfanos is one of the UNESCO World Heritage monuments in Old Town Thessaloniki.

Agios Nikolaos Orfanos is particularly famous for its frescoes. They’re examples of the Palaiologan Renaissance – a high point of Byzantine art and culture. The wall paintings illustrate events from the bible with enormous expressive power. In an era when literacy was less universal, paintings like these were essential for conveying a narrative, like a graphic novel of the sacred.

The View from the Old City Walls of Ano Poli

By night, the old city walls crown the city with a golden glow The Byzantine walls of the Old Town Of the 15 UNESCO World Heritage monuments in Thessaloniki are the . These massive walls have a long history. Although most of the construction dates from the Byzantine era, some portions of the walls are Roman. Much of what you see now are additions of the early Christian era – the 4th or 5th century AD. There were more major additions in the Palaiologan era, including additions Empress Anna Palaiogina made in the second half of the 14th century.

The Trigonio Tower – also called the Alysseos Tower – is the premier viewpoint in the city, and not just for tourists. Join the locals there for an unbeatable view. There are several cafes with fabulous views right by the tower.

Things to Do in Old Town Thessaloniki – Visit the Heptapyrgion, or Genti Koule (Yedi Kule)

At the acropolis – or highest point – of Thessaloniki, is a great tower. The Greek name is Heptapyrgion – which means “Fortress of Seven Towers.” It had the same name during the Ottoman era (1430 -1912) – Yedi Kule – which also means “seven towers.” The spelling changed to Genti Koule. The Ottomans left. but Genti Koule is the name that stuck.

The fortress dates from the 14th century, and when the Ottomans conquered the city, they strengthened the fortress further. It was a military fortress until the late 19th century.It then became a prison, of the same name. When Thessaloniki was liberated in 1912, the Genti Koule remained a prison. And it became an infamous one – its name appears in many Rebetiko songs. Rebetiko, a type of urban Greek blues that came over with the Greeks refugees of Asia Minor, is a cultural essential in Thessaloniki.

Things to Do in Old Town Thessaloniki – A Magical Monastery.

For different and equally spectacular view of the city than from the Trigonio Tower, visit a 14th century Monastery. The Vlatadon Monastery – Moni Vlatadon – is the only Byzantine Monastery still in operation in Thessaloniki today. During the Ottoman centuries, Moni Vlatadon remained a Christian monastery. The Vlatadon Monastery belongs to the Patriarchate of Constantinople. The church is from 1351. The surrounding building, which houses a Patriarchal institute of studies, is a relatively recent addition of 1968.

This is a wonderful place to visit, for the view, the magnificent 14th-century frescoes (only revealed in the earthquake of 1978), the bells in the churchyard, and not least, the aviary.

Unlike the Vlatadon Monastery – an easy-to-reach landmark, the church of Osios David is hard to find. In fact, it’s almost directly below the monastery, but it’s reached through a maze of paths and stairs like a treasure in a treasure hunt. The small church is humble from the outside, and mysterious within. This is one of Thessaloniki’s oldest churches, dating from the late 5th century. Legend has it that Theodora, the secretly Christian daughter of Emperor Maximus, disguised the church as a bathhouse.

This is another of Thessaloniki’s 15 UNESCO World Heritage Monuments. Its mosaic is considered a masterpiece of Early Christian Art. The mosaic is a magical depiction of the vision of Ezekiel, with Christ, in a rare depiction a a beardless adolescent, seated on a rainbow with the river of Jordan at his feet. Surrounding him are the four Evangelists in their classic depictions. This is the most vivid, engaging mosaic in Thessaloniki. The intimate space enhances the experience.

Ano Poli is a mix of tradition and modern creativity. The traditional character of the old houses and the atmospheric, shady paths make this neighborhood as popular with students as it is with the older residents tending their gardens. The picturesque abandoned lots and the sides of old buildings are covered with beautiful street art, a harmonious addition to the neighborhood’s authentic character. The Old Town serves as an outdoor gallery for some of Thessaloniki’s best street art.

For over eight centuries, the citizens of the city enjoyed these public baths in Ano Poli. There were many bath houses like this one, referenced in Byzantine texts, but this is the only one still standing. The baths only closed in 1940.

They are open three days a week. Inside you can see how the bathing experience unfolded – a room for undressing, a warm room – tepidarium – to relax and prepare for the bath, and a hot room – calderium.

The Turbes of Musa Baba

In Ano Poli’s Terpsithea square is a small exotic pavillion. This is the Turbes (masoleum) of the revered Sufi Holy Man Musa Baba. Musa Baba, of the Bektashi Dervish order, lived sometime in the 16th century.

But many accounts relate that he was still wandering the neighborhood centuries later, up through the early 1900’s. Christians revered him; they thought he was the miraculous reincarnation of St. George. They lit candles at the Turbes, and asked his intervention in fighting illnesses. You’ll find more in Mark Mazower’s Salonica: City of Ghosts.

Tsinari – The Village of Ano Poli

One of the corners of the Old Town of Thessaloniki that locals like best takes its name from the Turkish word for “plane tree” (çınar ağacı). Shady Tsinari – little more than an intersection – has a couple of picturesque tavernas and cafes with places to sit outdoors. There’s an old Turkish fountain, and charming buildings in the surrounding streets. Locals like to come here and let a relaxing afternoon of ouzo, meze and conversation unfold over the space of hours. It’s like taking a day trip that’s actually just a 10 minute walk from the center.

At the lower edge of Ano Poli is the perhaps the most exciting landmark of all. Many of the mosques of Thessaloniki were lost in the great fire of 1917. The 15th-century Alaja Imaret is the only intact mosque of that era. It’s plain from the outside, in quiet and shabby courtyard of apartment buildings. That’s part of the charm, because the interior is spectacular. The two high domes are beautifully painted in arabesques and tromp l’oeil draperies, and faux windows opening onto landscapes lost to time.

The Alaja Imaret makes a perfect finale to a ramble in Ano Poli.

You’re now very close to Agios Dimitrios Church. If you’re ready for a sweet, try a sheep’s milk ice cream at Dorkada, the tiny, old-fashioned pastry shop right next door to the Imaret on Kassandrou street.

Wear your most sturdy and comfortable shoes for navigating the sometimes steep and slippery cobblestone alleys, paths, and stairs.

In Monasteries and Churches, both men and women should have covered knees and shoulders.

Although the hike up brings you through a lovely part of Ano Poli, you could skip it and instead take the bus #23 to Eptapirgiou and make your way down from the top. If your time is limited, you can take a more streamlined route, beginning at the Heptpyrio/Genti Koule, continuing to the Trigonio Tower, then the Vlatadon Monastery, to Osios David, the Turbes of Musa Baba, and then ending at the Alaja Imaret. 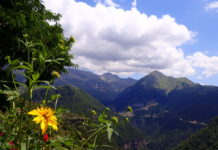 Staying in a Luxury Private Villa in Crete – The Ideal...